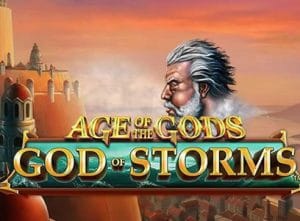 Age of the Gods God of Storms: Demo

WHERE TO PLAY Age of the Gods God of Storms SLOT

Poseidon, God of the Sea can deliver some mighty rewards in Age of the Gods God of Storms, another release in the myth and legend-themed series from Playtech. This one is a superbly designed 5 reel, 25 payline game that comes with shifting stacked wild re-spins and multipliers of up to 5x. Play from 25p to £500 per spin on all devices.

Like all of the video slots in the Age of the Gods series, there’s plenty to like about the design of Age of the Gods God of Storms. The reels are set against an ancient harbour fortification. With its temples, walls and fortress, it’s the sort of thing that wouldn’t look out of place in Game of Thrones.

The marble style reels include lower value playing cards as well as beautifully designed pots and vases, an archer ready to fire his bow, a sword wielding warrior woman, a Spartan-style soldier in full military kit and a sea monster.

The symbol you’ll really be hoping to see though is the galley style ship which is the wild – it can land in a fully stacked formation to turn the whole of the reel wild. It also triggers God of Storm’s main attraction, the Wild Wind Respins feature.

Land a stacked wild and you’ll be awarded a free respin. The bearded figure of Poseidon will rise up to the right of the reels – he’ll blow the stacked wild 1 reel to the left. With each blow and each respin comes an expanding multiplier – this starts at 1x then rises to 2x, 3x and eventually 5x. It’s possible to land multiple stacked wilds on the same triggering spin which can lead to some especially impressive action.

Like many Playtech video slots, Age of the Gods God of Storms also offers a chance to win a bumper progressive jackpot. Once triggered, you’ll win ` of the Power, Super Power, Extra Power or Ultimate Power prizes. The latter is where the life-changing awards are made.

The Age of the Gods series will take centre stage now that Playtech is no longer producing any Marvel superhero-themed game. They’ve certainly thrown the proverbial kitchen sink at God of Storms. The design here is as good as any of the Age of the Gods titles.

There’s plenty of innovation on offer in the features too. The range of extras isn’t the widest but the combination of stacked wilds, respins and expanding multiplier makes for an enticing combination. Get lucky there and these stormy waters can deliver some potentially explosive action. If you like Poseidon, Novomatic’s Mighty Trident and Playtech’s Age of the Gods feature the God of the Ocean.