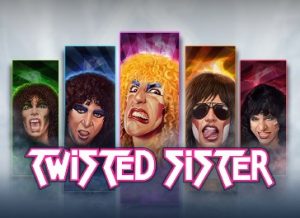 WHERE TO PLAY Twisted Sister SLOT

Rock out with poodle-permed rockers in this music-themed official Twisted Sister slot from Play ‘n GO. For the younger readers, Twister Sister were an American heavy metal band that first rose to prominence in the 1970s and 80s thanks to hits like “We’re Not Gonna Take It” and “I Wanna Rock”. This slot version comes with cascading reels, 2 wilds, mega symbols and a host of features that are based on the band members which are triggered when you power up the charge meter. Found out more about this brash, noisy slot in our detailed Twister Sister review.

The set list of features in Twisted Sister is pretty extensive. For starters, there are cascading reels. Look out too for 2 different wilds, and a range of extras that become active if you power the Charge Meter. Let’s have a closer look.

Each time a band member symbol appears on a spin, it lights up a position on the Charge Meter. For every 5 symbols on the Meter, 1 feature is added at the end of the spin. One band member is picked at random to trigger the feature. Here’s what they offer.

The character Angry Dad was a regular feature of the band’s anarchic videos and ‘Mr Middle America’ makes an appearance in this slot version too. This is a wild scatter that appears in addition to the standard wild. 2 Angry Dad wild scatters can be added to the reels randomly on a non-winning spin. This is important as the Angry Dad wild scatter triggers the We’re Not Gonna Take It feature which we’ll look at below.

We’re Not Gonna Take It feature

The We’re Not Gonna Take It feature is triggered by amassing a quartet of wild scatters in the Scatter Collector. If you trigger with 5 or more, the Anger Meter is overcharged meaning the win multiplier increases for each extra wild scatter. If you were to trigger with 6 for example, you’d benefit from a 3x multiplier.

A 2×2 Mega Symbol is in play during this bonus. It works its way across the grid towards one of the wild scatters, smashing symbols and creating cascades as it goes.

The Twisted Sister slot game is played using a 6×6 reel grid. Winning combinations are created by landing clusters of matching symbols. You need at least 5 of them to get a cluster, appearing next to each other.

There’s plenty of variety when it comes to bet levels. You can play from between 10p and £100 per spin. You’ll have the chance to speed things up by spinning in turbo mode if required. There are plenty of autoplay options here too including single win and loss limits.

The volume here might be amped up to 11 but that’s not the case with the Twisted Sister volatility. The variance here is in the medium range, coming in at around 6 out of 10. The RTP is a solid 96.2%.

When it comes to payouts, Twisted Sister can dish out wins of 4,500 x bet per spin or free spin. Slots based on heavy metal bands are often dark, dreary looking affairs full of dodgy Satanic imagery. Twisted Sister is surprisingly bright and colourful. The slot is of course the official game for the Twisted Sister band.

The reels are backed by white amps and a bright pink guitar. On the grid you’ll see record sleeve, badge and plectrum symbols as well as 5 members of the band – Jay Jay French, Eddie “Fingers” Ojeda, Mark “The Animal” Mendoza and Anthony “A. J.” Pero.

The best standard symbol is the lead singer, Dee Snider, who will get you a payout equal to your stake for a cluster of 5 symbols but 250x your total bet if you land 25 in combination.

There’s a comic book feel to the imagery which is excellent and the backing track is as loud as you’d expect (perhaps a little too loud for our delicate ears!). Overall, the design is very impressively done.

As usual for a Play ‘n GO slot, the action on the Twisted Sister mobile slot is right up there with the desktop version. To get the full effect, you probably want to hear it with proper speakers rather than on a tiny mobile phone. Otherwise, all good.

We’re not really fans of this band or even this style of music but were won over by the Twisted Sister slot. The design is excellent and there’s plenty of variety on offer from the gameplay thanks to the wide range of extras. We’d like to have seen a little bit more oomph on the variance front but overall, Twisted Sister gets a thumbs up.

Play ‘n GO has released plenty of official band slots with Annihilator and Demon two of their better efforts.

❓ Just who are Twisted Sister?

Twisted Sister were an American heavy rock band known for their outrageous and often slapstick music videos that featured a character called Angry Dad. They were brash, loud and had ridiculous, poodle-permed hair.

🥇 What is the Twisted Sister slot RTP?

Like the variance, the Twisted Sister RTP is place slap bang in the medium range. The exact RTP number is 96.2%. That’s a perfectly solid number and certainly not outrageously high or low.

🎰 What is the maximum potential payout in Twisted Sister?

⚡ What is the Twisted Sister slot volatility?

You might expect a slot that turns the volume to full blast would be really fiery on the variance front. That’s not really the case though. The Twister Sister variance sits firmly in the medium range.