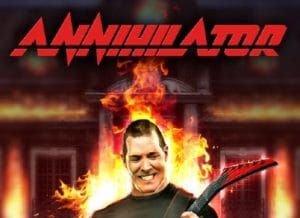 WHERE TO PLAY Annihilator SLOT

Rock out with thrash metal royalty in the Annihilator slot, a 5 reel, 10 payline game from Play ’n GO. Based on the Canadian band of the same name, Annihilator comes with the creepy visuals you might expect from a slot with this theme as well as some cracking extras. In our in-depth Annihilator review you’ll find out about expanding wilds which deliver re-spins until you land a winner or trigger the feature. There’s also a pick and click bonus and a free spins round where trails of wilds can deliver some potentially explosive results. All this while a medley of Annihilator’s top hits play in the background. Let’s have closer look.

There’s one random extra that can land on any base game spin as well as a couple of triggered feature rounds. These deliver an assortment of re-spins, pick me prizes and free spins as well as some pretty wild modifiers. Each feature is based on a song in the Annihilator back catalogue.

This can trigger at random on any base game spin. If you land a wild on this spin, it expands to fill the whole of the reel.

If you don’t create a winning combination on this spin, the expanding wild is locked in place and the rest of the reels spin again. The re-spins continue until a winner is created or you trigger one of the other feature rounds.

This round is triggered by landing 3 bonus symbols (which feature a very creepy doll) on reels 2, 3 and 4 on the same spin. You’ll then enter the Fun Palace where you’ll play a classic pick and click bonus. Choose from the dolls to reveal hidden prizes.

If you discover a scatter symbol in the Fun Palace, the round ends immediately and you’ll advance to the free spins round.

You can trigger this round from the Fun Palace or by landing 3 scatter symbols (the demon) on the same spin. You’ll then receive 8 free spins with an expanding wild guaranteed to appear on each of them.

The wild also has some magically properties. It shifts sideways prior to each free spin, highlighting the positions it passes in a trail of fire. This is where things can get very interesting. If you land a wild symbol in any symbol that’s edged in fire, the whole of the trail turns wild.

You can add more free spins to your total here too. Each time a scatter symbol lands another 2 free spins are added to your total. In theory, you can land up to 50 free spins during the Set the World on Fire Free Spins feature.

Annihilator uses a classic 5 reel, 3 row game engine which offers 10 paylines. Winners are created in the usual manner by landing 3 or more matching symbols in one of those paylines, starting from the leftmost reel.

There’s plenty of variety when it comes to bet sizing. You can wager from just 10p per spin or ramp it up to £100 per spin. There are autoplay and turbo spin modes available if required. You can also customise your experience by setting loss/win limits and stop the autoplay if you trigger the free spins feature.

Like many slots in the Play ’n GO catalogue, the Annihilator slot is a volatile one. It’s not quite as fiery as some but on a scale of 1 to 10 we’d put the variance here around an 8. The max payout is 400 x bet per spin, re-spin or free spin. The Annihilator RTP is 96.20% which is in the middle of the pack. A slot based on a thrash metal band Annihilator was never going to be filled with puppies, rainbows and unicorns. The visuals here are just as dark and creepy as you’d expect. The A to 10 royals are done razor-style and are dripping in blood. The rest of the imagery takes inspiration from the band’s songs and is equally hair-raising.

They include guitars, cracked mirrors and a character called Alice and her doll, Clare. The band’s legendary guitarist, Jeff Waters, is the game’s wild. Land 5 wilds on a payline for a top payout of some 40 x your total stake.

You can listen to a selection of the band’s songs while you spin too. Head to the playlist to choose which tracks you want to listen to.

If we had to imagine the sound and visuals from a slot based on a thrash metal band this is precisely what we’d expect to see and hear. The usual Play ‘n GO game interface is in use here. It’s simple and intuitive which means it’s easy to amend bet sizes, set autoplay or have a deep dive into the paytable.

The dark visuals are decent enough on a mobile device. To get the full effect, you won’t want to listen to the soundtrack on tinny mobile speakers though.

This Annihilator slot hasn’t got us investigating the Annihilator back catalogue. There are some pretty decent features here though, whether or not you’re a fan of the band. Old gits that we are, the volume control and mute button came in handy here. The thrash metal isn’t to our tastes but the expanding wilds, pick and click feature and the free spins with trails of wilds make for a good combination.

The max win per spin is just 400 x bet which is quite low for a Play ‘n GO slot. The most you can win in the Set the World on Fire Free Spins feature in total is 5,000 x your bet. If you’re a metal fan, dive in. Even if you’re not, you’re better checking out the Testament slot (from Play ‘n GO) which offers potential 20,000 x bet payouts.

❓ Will you hear Annihilator’s songs while you play?

Yes, the soundtrack to the Annihilator slot includes some of the band’s top tracks.

🥇 What is the Annihilator slot RTP?

🎰 What is the Annihilator max win?

The max win from a Annihilator spin is 400 x your bet. In the Set the World on Fire Free Spins feature, you can win up to 5,000 x your bet in total.

⚡What are the Annihilator slot features?