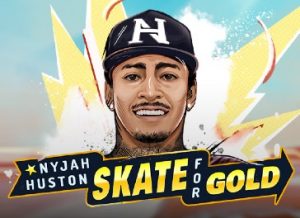 WHERE TO PLAY Nyjah Huston: Skate for Gold SLOT

Based on the American skateboard champion, the Nyjah Huston: Skate for Gold slot is a 5 reel, 10 payline game from Play ‘n GO.  Boasting graffiti-style design, it comes with some pretty funky extras including re-spins with expanding multiplier wilds that can also boost payouts by up to 10x. Land the letter symbols in the correct combination to spell the word SKATE and you’ll trigger the Skate Free Spins feature. An animated Nyjah must then successfully perform a set of tricks to bring respins and even more free spins into play. Discover more in out in-depth Nyjah Huston: Skate for Gold review.

The set up in the Nyjah Huston: Skate for Gold slot game is straightforward. The action plays out on a standard 5 reel, 3 row, 10 payline machine. Land 3 or more matching symbols (or a wild) in a payline, starting from reel 1 to create a winner.

Bet levels start at 10p per spin for the micro stakes players, rising to a maximum of £100 per spin for the super high rollers. You’ll find the usual Autospin function where you can choose up to 100 autospins. The ability to use Turbo Mode is also available.

The RTP is 96.2% which is solid enough and a pretty standard number for a slot from the Swedish developer. Combine that with the 4/10 variance and it’s a formula for fairly frequent wins. The maximum potential payout is 5,000 x bet in total. The most you can win per spin is 4,000 x your total bet in fact.

This trip to the virtual skatepark comes with some nifty bonus features. They include re-spins, wilds, expanding wilds and potential multipliers. There’s also a free spins round with even more goodies attached. The combo meter can trigger at random on any base game spin. A meter appears above the reels which will include 1 of the 3 tricks. If the corresponding trick symbol appears on the reels on that spin, you’ll trigger the Wildboard Re-Spin feature.

On this re-spin, an animated Nyjah skates across the reels, leaving a trail of wilds in his wake. One of these could be an expanding wild which will fill the whole of the reel. This expanded symbol can turn into a Golden Wildboard which also delivers a multiplier boost of 2x, 3x, 5x or even 10x. It’s usually scatters or bonus symbols that trigger a free spins round. It’s a little different in Nyjah Huston: Skate for Gold. If you see symbols that spell out the word SKATE across all 5 reels, you’ll activate the Skate Free Spins feature. On offer are 12 free spins.

The Combo Meter is active throughout the free spins. It will display 3 tricks. If Nyjah performs the 3 tricks required in the right order, you’ll trigger a Wildboard Re-Spin, complete with the wild goodies attached. It will also add another 2 free spins to your total.

It’s possible to land the Golden Wildboard and the free spins trigger on the same spin. When this happens, you’ll play the re-spins first before going on to the Skate Free Spins. The  Nyjah Huston: Skate for Gold slot is the official game for Nyjah Huston who is a world champion skateboarder and the highest paid skateboarder in the world. The visuals in the slot are done comic book style. The setting is a Californian skate park.

The graffiti-style image works well enough and fits the theme nicely. Play ‘n GO slots are often glossy, high end affairs. There’re a grittier, street feel to the visuals here which is just what you’d expect given the skateboarding theme.

Instead of the usual playing cards, the lower value symbols include the letters S, K, A, T and E. More rewarding are the 4 symbols that show Nyjah performing a trick. Most rewarding of all is Nyjah himself which pays 2.5, 5 or 25 x your bet if you land 3, 4 or 5 across a payline. Better still is the skateboard wild which pays 4, 8 or 40 x bet if you land 3, 4 or 5 in combo.

The cartoon-style visuals work very nicely on mobile as well as desktop devices. The simple gameplay is well suited to smaller screen play too. There are a few minor changes to the set up but overall, the Nyjah Huston: Skate for Gold mobile slot works perfectly well.

Not being skateboard aficionados, we can’t really comment on whether this is a worthy adaptation of Nyjah Huston’s talents. What we can say is that’s it’s a perfectly solid slot release that combines decent design with some playable extras. The expanding wilds, complete with the potential 10x multipliers, can be well worth hitting.

What is the Nyjah Huston: Skate for Gold RTP?

The Nyjah Huston: Skate for Gold return to player rate is 96.2%. That figure is consistent with most of Play ‘n GO’s releases. Slightly below medium variance wise, you should get plenty of time to land tricks and bonus features.

What is the Nyjah Huston: Skate for Gold max win?

The biggest payout possible from the Nyjah Huston: Skate for Gold slot is 5,000 x your total bet. The key to landing a big win is from the 10x multiplier from the Wildboard Re-Spin feature which can apply in the base game and free spins.

What bonus features does Nyjah Huston: Skate for Gold have?

On any spin you could see the Combo Meter become active. If you land a symbol that matches the trick, you could land a re-spin. Nyjah skates across the reel leaving wilds. These could include an expanding wild which can turn gold and deliver a multiplier up to 10x. There’s also a Skate Free Spins feature where the Combo Meter is active on every free spin. Find out more in the Bonus features section.

Is the Nyjah Huston: Skate for Gold slot an official game?

Yes. The game is the official slot for the world champion skateboarder Nyjah Huston. The game has a skateboard theme and is set in a Californian skate park. With comic book style graphics, Nyjah must land tricks to trigger extras like re-spins and wild multipliers.