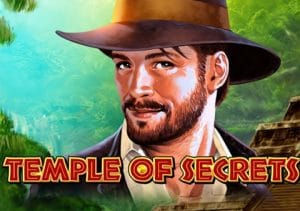 WHERE TO PLAY Temple of Secrets SLOT

Mighty jungle riches are waiting to be discovered in Temple of Secrets, a highly volatile 5 reel, 50 payline video slot from the Novomatic stable. On offer here is a free spins round that awards up to 90 free spins with a multiplier that can rise up to 10x with each subsequent re-trigger. There’s also a progressive jackpot which can deliver some potentially massive rewards. Play, across desktop, mobile and tablet devices, from between 50p and £100 per spin.

The deserts of Egypt are usually the setting for Novomatic’s archaeology-themed video slots – taking a break from the sand, our plucky adventurer instead heads to the jungles of America for his latest quest for gold.

As usual with Novomatic games, there’s nothing too flashy on show as far as design goes. The plain black reels include A to 9 playing cards as well as a gold totem, a green gemstone and a jungle pyramid. The top standard symbols are the leopard and the monkey. Land 5 of these in combination and you’ll pocket an award equal to 8 times your total bet.

The Indiana Jones-style adventurer is the game’s wild – he appears on all reels and substitutes for everything apart from the scatter. 5 wilds on a single payline will get you 10 times your total stake. The wild adventurer is also central to the progressive jackpot. Fill all 5 reels with stacked wilds and you’ll trigger the progressive jackpot! If playing at less than maximum stakes, you’ll win the corresponding amount (i.e. 50% of the jackpot for half the maximum stake).

The other way to land a healthy win is via the Bonus feature which is triggered by landing 3, 4 or 5 treasure map scatters on the same spin. You’ll win a prize equal to 10, 10 or 100 times your total bet as well as 10 free spins. On this initial run of free spins, all payouts are doubled.

If you land 3 or more scatters for a re-trigger, you’ll get another 10 free spins with an increased multiplier of 3x. Each re-trigger thereafter boosts the multiplier by 1, up to 1 maximum of 10x. This means you can benefit from up to 90 free spins – your 10 remaining free spins will therefore be subject to the maximum 10x multiplier!

The jungle is dangerous territory for the unwary and the same is true for your bankroll – Temple of Secrets is a highly volatile video slot. You can expect lengthy spells when the cashier will only head south. Trigger and re-trigger the free spins though and there are some big potential payouts on offer.

We’re in classic Novomatic territory with Temple of Secrets. The visuals are ordinary and the backing track generic. The action is simple, fast and comes with sky-high variance. If you’re already a fan of the developer’s unique blend then Temple of Secrets will certainly appeal. If you enjoy the theme but want something a little easier on the eye, then Jungle Jim El Dorado from Microgaming is worth considering.