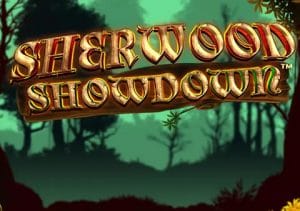 WHERE TO PLAY Sherwood Showdown SLOT

Join Robin Hood and his band of Merry Men in the Sherwood Showdown slot. It’s a 5 reel, 20 payline game from Novomatic that, unusually for a slot from this developer, comes with a huge range of extras. There are 5 modifiers as well as a streak respin feature and free spins with multipliers. Head to the forests of Nottingham from 20p to £80 per spin.

A dimly lit Sherwood Forest forms the backdrop to the action here. On the reels you’ll see A to 10 symbols as well as members of Robin Hood’s band of outlaws including Friar Tuck, Little John and Maid Marian. The top standard symbol is the shield which pays 0.1, 1.5, 3 or 15 times your total bet if you land 2, 3, 4 or 5 on a payline. Those same amounts are also on offer from the wild which replaces all the standard symbols.

We’ve come to expect slots from Novomatic to be rather stripped back affairs as far as gameplay is concerned. That’s not the case with Sherwood Showdown which is brimming with extras. The following features are randomly triggered:

If you land Free Spins scatters on reel 1 and 3, you could benefit from the Reel Rise feature which extends the size of reel 5 making it a little easier to find that all-important third scatter.

The Free Spins feature is triggered by landing scatters on reels 1, 3 and 5 on the same spin. These spins can come with multipliers attached. What you get depends on the scatter that appears on reel 5:

Robin can appear on any spin and fire arrows to upgrade your free spins or add extra free spins to your total. This round is interrupted by the Showdown. Robin will do battle with the Wolf. If he wins, the round continues. If he loses, the free spins are over.

The Hold & Spin Streak feature is triggered when a coin with a 2x multiplier attached appears. That symbols locks in position and the reels spin again. The respins keep on coming as long as a new coin lands. Once you are out of spins, the multipliers are added together and applied to your total stake.

Sherwood Showdown isn’t your average Novomatic slot. The 3D style design and jaunty soundtrack are rather nicely done and the range of extras impresses. What is familiar here is the variance. The volatility is in the medium to high range. The most you can win per spin is 300 times your bet – add in the 5x King multiplier and you could win 1,500 times your bet on each free spin.

We liked this take on the classic English folk tale. If you fancy trying to rob from the rich, then give it a look. If you like the theme, NetEnt’s Robin Hood: Shifting Riches slot is recommended.