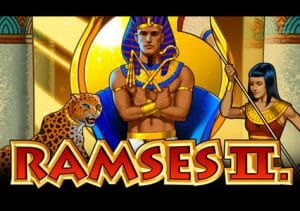 WHERE TO PLAY Ramses II SLOT

Based on the life and times of the most powerful emperor in the Egyptian empire, Ramses II is a 5 reel, 20 payline video slot. Created by Novomatic, it’s an extremely volatile game that comes with wild wins that are doubled and a free spins feature where all payouts are trebled. Head to the valley of the kings on your desktop, tablet or mobile device from between 20p and £40 per spin.

Ramses II is the game’s wild – as well as replacing all other symbols apart from the scatter, he also doubles the payout whenever he forms part of a winning line. For example, you’ll be awarded a prize of 500 coins if you land 5 of the Anubis symbol on a single payline. If you manage 4 of Anubis plus the Ramses II wild, the prize is doubled to 1,000 coins.

The main extra on offer in Ramses II is the Free Games feature which is triggered by landing 3, 4 or 5 of the scarab beetle scatter anywhere on the reels on the same spin. As well as a prize equal to 5, 25 or 150 times your total stake, you’ll also receive 15 free spins. All payouts during this feature benefit from a 3x multiplier and are trebled. Land 3 or more scarab beetles and another 15 free spins, complete with the trebling multiplier, will be added to your tally.

Ramses II is a simple game – the visuals are basic, the soundtrack generic and the features common. What makes this trip to ancient Egypt so alluring is the sky-high variance. Expect spells as dry as the Sahara but get on a roll during the free spins round where the multipliers can quickly work their magic and there are some mighty hauls of treasure to be had.

There’s nothing especially innovative on offer here and the Egyptian theme has been done to death. Ramses II remains a very playable proposition though. If you like your action to come with a big slice of volatility, then this is the ancient game for you. If you like the theme though, you have plenty of options with Novomatic’s Pharaoh’s Ring recommended.