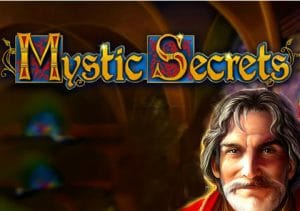 WHERE TO PLAY Mystic Secrets SLOT

Try and discover the secrets of a medieval alchemist and turn base metal into treasure in Mystic Secrets, a 5 reel, 10 payline video slot from Novomatic. This volatile game and comes with a bonus round where 2 reels turn wild on each of your 10 free spins. Playable on all devices, stakes range from 10p to £50 per spin.

The design in Mystic Secrets has a real medieval feel – set against a woodland backdrop with a castle in the distance, the reels include stylised A to 10 playing cards as well as quill, ink and parchment, a candelabra, a gold goblet, a smiling serving girl and a bowl-haired apprentice.

They’re joined by the bearded magic man who is the game’s wild – he replaces all other symbols apart from the scatter. Land 2, 3, 4 or 5 of these in a single payline and you’ll receive a payout equal to 1, 5, 50 or 500 times your total stake.

The book of spells is the scatter which will get you a payout of 5, 50 or 500 times your bet if you land 3, 4 or 5 on the same spin. You’ll also trigger the Free Games feature and with it, 10 free spins. Like many Novomatic games, the free spins come with a twist. In this case, it’s the 2 wild reels that are in play on each of your free spins.

The gameplay in Novomatic video slots is usually pretty simple and that’s the case with Faust – what they lack in variety and visual flair they normally make up with volatility. While the variance isn’t quite as high as some games from the Novomatic catalogue, it’s still pretty feisty. Expect lengthy down spells but hope to cash in during the feature when the free spins and stacked wilds can combine to impressive effect.

This is a typical Novomatic game – the design isn’t especially sophisticated (although the backing track in the free spins is a nice match for the magical theme) but the feature round can deliver some pretty serious action.

If you’re after some simple, volatile action then Mystic Secrets delivers just that. Unlock those secrets and there’s some decent action waiting to be discovered here. Sticking to the medieval theme, the volatile Black Knight II from WMS is worth looking into.