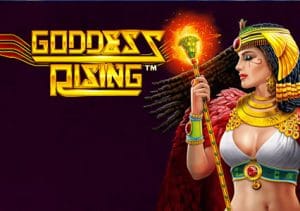 WHERE TO PLAY Goddess Rising SLOT

Take another virtual trip to the land of the pharaohs in Goddess Rising. This ancient Egyptian-themed video slot has been created by Novomatic and is played using a 5 reel, 4 row, 40 payline game engine. The highlight is the bonus round that awards an initial 12 free spins. Look out for wilds that expand, upgrade symbols and add extra free spins to your tally whenever they hit. Play on all devices from between 50p and £100 per spin.

Many of Novomatic’s recent releases have benefited from improved visuals and that’s definitely the case with Goddess Rising which looks and sounds terrific. Joining the lower value A to J symbols on the reels are a selection of hieroglyphs which will be instantly recognisable to anyone who has seen the TV quiz show Only Connect.

The best of these is the golden Pharaoh which pays 0.2, 4 or 10 times your total bet if you land 3, 4 or 5 on the same payline. There’s also a wild, the Goddess, which expands to fill the whole reel whenever it hits.

The individual payout amounts aren’t the biggest we grant you. Trigger the Free Games feature though and you can land some big clusters of symbols to excellent effect. That feature is triggered by landing 3, 4 or 5 of the bonus scatter on the same spin. As well as a payout of 2, 10 or 100 times your total bet, you’ll also receive 12 free spins. It’s here that things have the potential to get much more interesting.

The goddess performs her usual expanding wild magic during the feature. Land 1, 2 or 3 of these on the same free spin and another 1, 3 or 5 free spins are added to your total. Every time the goddess hits, she also delivers a symbol upgrade.

The first time the wild hits all of the 2 wreaths symbols transform into the sticks. The next wild that hits turns all the sticks into scarab beetles and so on. If enough wilds land, you’ll see all of the higher value symbols transform into the top paying golden Pharaoh symbol which spins alongside the lower value royals. With so many extra higher paying symbols in play, you can land some big combinations towards the end of the feature.

You’ll also have a chance at landing 1 of 4 jackpot prizes in the Jackpot feature – the Grand Jackpot is the biggest and guarantees you £5,000 at a minimum.

We really liked Goddess Rising. The visuals are nicely done and the soundtrack has a haunting quality in keeping with the theme. The gameplay stacks up well too, especially the Free Games feature where the free spins, expanding wilds and upgrading symbols can combine very nicely.

The appetite for all things Egyptian shows no sign of abating. Goddess Rising is a very entertaining new addition and well worth a spin if you like the ancient theme. Saying that, you can only win 200 times your bet on each spin/free spin so it’s all about the jackpots – if you want a high variance trip to ancient Egypt, Quickspin’s Ark of Mystery is recommended.