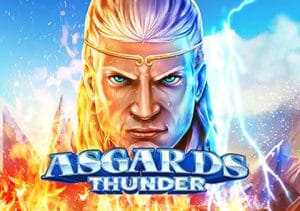 WHERE TO PLAY Asgard’s Thunder SLOT

Set in 1 of the 9 Worlds of the Norse religion, Asgard’s Thunder is an epic 5 reel, 20 payline video slot that comes with classy visuals (yes, really) and simple but potentially explosive gameplay. Played using a 5 reel, 20 payline game engine, stakes start at 20p, rising to a maximum of 40p per spin. You won’t find a huge range of extras here but the action ticks over nicely.

Simple, volatile gameplay has become a staple formula for Novomatic video slots and that’s just what’s on offer in this entertaining Norse saga. The developers at Novomatic have really beefed up the design of their most recent releases and Asgard’s Thunder is a prime example.

With a snow-capped mountain range and a roaring fire in the background, you’ll see A to 9 royals on the black reels alongside a jade vase, a cornucopia full of colourful jewels and a treasure chest. The Norse god is the most rewarding symbol, awarding 0.25, 2.5 10 or 50 times your bet for a 2, 3, 4 or 5 symbol combo.

On any spin you could see wild gold hammers thrown onto the reels. These substitutes for all the standard symbols. They can also deliver some nifty rewards too. 5 on a payline will get you a payout of 100 times your total bet.

The Free Games feature is triggered in the usual manner by landing 3, 4 or 5 scatters on the same spin. After pocketing a payout of 2, 10 or 50 times your bet, you’ll go on to play 8 free spins. The 4 higher paying symbols are replaced by the gold hammer wild for the duration of this feature. You can also retrigger the feature untold times.

You won’t find much in the way of back story or variety in Asgard’s Thunder. That’s no bad thing though. Simple often works best and the straightforward gameplay on offer here is an example of that. The range of bonus feature isn’t wide but the Free Games feature can be a cracker because it’s 4 times easier to fill the reels with wilds – if you do so, you’ll win 2,000 times your total bet.

This Norse epic is a simple but entertaining one. If you enjoy this myth and legend theme, then it’s well worth a closer look. If you fancy another trip to Asgard, Blueprint Gaming’s Lightning Strike MegaWays would be my suggestion.