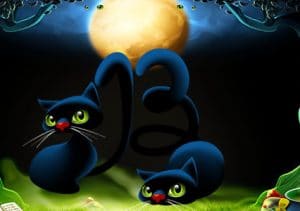 WHERE TO PLAY 13 SLOT

The number 13 is traditionally associated with bad rather than good fortune but there are plenty of opportunities to get lucky in the video slot of that name from Novomatic. 13 is a 5 reel, 10 payline game that celebrates all things superstitious. The highlight is the Free Games feature that awards, you’ve guessed it, 13 free spins where wilds lock in place until they form part of a winner. Play on all devices from between 10p and £50 per spin.

The design in 13 is better than many other video slots in the Novomatic catalogue. There’s a horror theme on display with the reels set within a haunted forest. Joining the usual collection of lower value playing cards are voodoo dolls, tarot cards, doors, mirrors and crystal balls.

They’re joined by the witch who is the game’s wild – the witch substitutes for everything apart from the scatter and can be very lucrative in her own right. Land 5 of them in the same payline and you’ll fly off with a bumper haul of 1,000 times your bet.

Like many games from this developer, there isn’t a huge range of extras on offer. It might lack variety but the Free Games feature in 13 can still pack a pretty heavyweight punch. To trigger it, you’ll need to land 3, 4 or 5 of the black cat scatter anywhere on the reels on the same spin. A payout of 5, 20 or 500 times your stake is made as well as an award of 13 free spins.

Hope to see more of the black cat scatter during the feature – every time it hits, 1 extra free spin is added to your tally. The wild also gains some magical properties during the feature – if a wild lands but doesn’t for part of a winning combination, it will stay locked in place until it does.

13 ticks many of the usual boxes for a Novomatic video slot. The imagery, while better than some previous efforts, still isn’t quite a match for the glossy 3D efforts from the likes of Quickspin and Thunderkick.

We don’t expect stunning visuals when we fire up a Novomatic game – what we do expect are simple gameplay and potentially fiery features and the medium to high variance 13 delivers just that. There’s nothing earth shattering on offer in 13 but if you fancy trying your luck on something simple and fast paced then this is certainly worth a look. If you’re looking for superb looking Novomatic games, Kingdom of Legend is highly recommended.