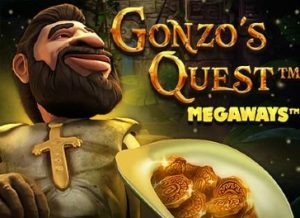 One of the online casino world’s most popular slots has been given the Megaways treatment. The Spanish conquistador gets even more opportunities to bag some gold in the Gonzo’s Quest Megaways slot. Created by NetEnt and Red Tiger Gaming, it’s a 6 reel, avalanche pays slot where the number of ways to win can reach up to 117,649. Highlights include earthquakes where the lower value symbols are removed from play and expanding multipliers. Trigger the Free Fall feature and those multipliers can reach up to 15x with payouts of up to 21,000 x bet. Does this sequel do justice to the original? Find out in our Gonzo’s Quest Megaways review.

The game engine in the Gonzo’s Quest Megaways slot will be familiar if you’ve played other slots with this mechanic. The number of symbols changes on each spin. This alters how many ways you can create a winner. If all the reels reach their maximum 7 symbols, you’ll have 117,649 Megaways active. Winning combinations are formed by landing 3 or more matching symbols on adjacent reels, starting from reel 1.

You can start this quest at bet levels of between 10p and £10 per spin. There’s an autoplay facility available where you can run up to 100 autospins complete with win and loss limits. There’s also an option for turbo spins if required.

The Gonzo’s Quest Megaways RTP is 96% which is as good as most online slot releases. It’s a medium to high variance game so big wins will be scarce. To compensate, the maximum payout is 21,000 x your bet on each spin or free spin.

The gameplay in NetEnt’s original Gonzo’s Quest was simple. There’s a lot more going on in this Megaways version. Successive avalanche wins increase a multiplier, earthquakes removed low value symbols from the reels while the free falls round can see massive multipliers of up to 15x.

When you do land a winner, those successful symbols are removed from the reels and new symbols replace them. A new payout consideration follows. If you hit a new winner, the process is repeated. These avalanches continue until there’s one where no new winner is created.

Each successive avalanche win also brings a multiplier into play. This can reach up to 5x in the base game:

The multiplier resets to 1x following a winless avalanche.

You can land up to 2 wilds on any spin. One on the first 3 reels, one on reels 4, 5 or 6. If a wild forms part of a winning combination, it’s not replaced during the avalanche. It remains in position to boost your winning chances. The wild substitutes for everything, including the bonus-triggering free fall symbols.

In this randomly triggered feature, all the lower value symbols are removed from the reels. A new avalanche follows which is made up of high value symbols only. Successive avalanche wins bring multipliers into play in the free spins too. The multipliers are even bigger than what’s on offer in the base game too: If you’ve played the original Gonzo’s Quest slot, you’ll find plenty that is familiar in this sequel. The game follows the adventures of conquistador Gonzalo Pizarro on his quest for the lost city of gold (El Dorado). With a ruined jungle pyramid in the background, he rhythmical backing track is a good fit for this theme too. No complaints about the design which is excellent.

The reel grid is made up of carved stone face masks and totems. They’re packed full of detail and very nicely done. You will see low value animals (fish, snakes, alligators and birds). The Mayan face masks are higher value with the health face mask the most rewarding – 6 on a payline will give you 15 x your total bet. The wild is represented by the question mark.

With so many moving parts and plenty of similar visuals, this is a slot that we’d rather play on a big screen device. The Gonzo’s Quest Megaways mobile slot is perfectly playable. For the full visual and aural effect, we’d opt for a desktop or tablet devices if possible.

Updating a fan favourite can be a risky proposition for a slot developer. The original became popular for a reason and messing about with the basics can be unpopular. NetEnt and Red Tiger Gaming has got things right here. They’ve kept the design similar to the original but really spiced up the gameplay.

There’s plenty of variety on offer during the base game. The free spins can be well worth landing too, courtesy of the multipliers which start at 3x but can reach a mighty 15x. Throw the max win of 21,000 x bet per spin and Gonzo’s Quest Megaways is a worth updating of an old classic.

What is the Gonzo’s Quest Megaways RTP?

The Gonzo’s Quest Megaways return to player rate is 96%. It’s a medium to high variance slot game though so expect smaller wins most the time. The key to winning is from the multipliers in the base game and free spins.

What is the Gonzo’s Quest Megaways max payout?

The Gonzo’s Quest Megaways slot packs quite the punch. The most you can pocket is 21,000 x your bet per spin or free spin. The chances of winning big increase dramatically in the Free Fall feature, especially with the multipliers that can reach 15x.

What are the Gonzo’s Quest Megaways bonus features?

Avalanche wins are central to the action here. Each successive avalanche increases a multiplier which can reach 5x in the base game. Trigger the Free Fall feature and the avalanche wins start at 3x but can reach a massive 15x. Look out too for the Earthquake where all the low value symbols are removed from play and a new, high value avalanche follows. See the Bonus features section for detailed information.

The original slot was created by NetEnt but Red Tiger Gaming and NetEnt are the slot providers behind Gonzo’s Quest Megaways. They’ve remained true to the original in terms of design but have really spiced up the gameplay.