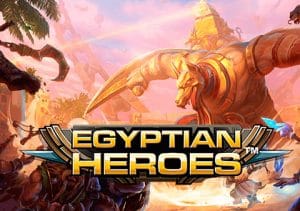 WHERE TO PLAY Egyptian Heroes SLOT

NetEnt takes you on the well-trodden path to the land of the ancients, this time in a video slot called Egyptian Heroes. Look out for wins on the Golden Win Line as they are boosted by multipliers of up to 5x. Also on offer are expanding wilds and a free spins round where a stacked wild is present on the middle reel throughout. Play on all devices from between 20p and £100 per spin.

Despite the theme here being ancient, there’s an almost sci-fi feel to the design. Set against a burial chamber backdrop, you’ll see A to 10 symbols alongside 3D versions of Egyptian animal gods. The best of these is the bird god Ra which pays 200 times your bet if you land 5 on a payline.

Keep a special eye out for the golden payline – if you land a winning combination on this randomly moving line, your payout will be boosted by a multiplier of between 2x and 5x. This is known as the Golden Bet Line feature. Appearing on the middle 3 reels only in the base game, the wild expands to fill the whole of that reel when it forms part of a winning combination.

The main feature offering here is the Free Spins feature – it’s triggered by landing 3, 4 or 5 of the burial mask scatter which will get you 10, 15 or 20 free spins. On each of those free spins, the middle reel will remain totally wild. The expanding wilds can land on reels 2 and 4 as in the base game which can lead to some potentially very impressive combinations.

Re-triggers are possible here too if you manage to find 3 scatters on the same spin. Furthermore, the Golden Bet Line feature applies meaning wins from every free spin can be subject to a multiplier up to 5x.

Ancient Egypt is a hugely popular destination for video slots players and developers. NetEnt’s Arabian adventure offers something a little different – despite being an old game, the design has an almost futuristic feel and works rather well.

There nothing very original from the features but the Golden Bet Line feature offers chance to spice up the base game and free spins feature, especially in combination with the expanding wilds. The Free Spins feature is a good one too thanks to the ever present stacked wild.

It’s not the flashiest ancient video slot you’ll see but Egyptian Heroes delivers, simple, fast-paced action and is well worth considering if you enjoy this theme. It’s medium to high variance with potential wins of up to 20,000 times your bet on each spin/free spin (you would need to fill the screen with Ra symbols). If you like classic games like this, NetEnt has plenty with Spellcast and Piggy Riches 2 of their better ones.