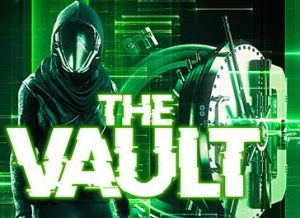 WHERE TO PLAY The Vault SLOT

Join a high-end cat burglar who goes by the name of Jewel and try and grab some Parisian loot in The Vault slot which has 5 reels and 20 paylines. This super volatile slot has been created by Snowborn Games and Microgaming and comes with moody, noir-style design and some cracking features. Highlights include re-spins and a free spins round that awards at least 10 free spins complete with a multiplier that starts at 3x but increases with each 1x symbol that lands. Also boosting your winning chances in the feature is a wild middle reel. Let’s take a closer look at this heist in The Vault review.

The range of features in The Vault isn’t massive. The high variance means that they’re not always the easiest to trigger. The respins and free spins with extras can be well worth waiting for though.

The respins continue until no new bonus symbol lands or you have at least 5 bonus symbol in position which unlocks The Vault Bonus feature.

Land 5 or more bonus symbols, either on the same single base game spin, or more likely via the Respin feature, to open The Vault Bonus feature.

Your reward here is 10 free spins with a starting 3x multiplier. There’s scope to increase the number of free spins and size of the multiplier though.

Each time a +1 symbol appears, it will add 1 extra free spin to your total. The 1x symbol does the same for the multiplier, increasing it by 1 each time one of these symbols lands. There’s no limit to how high the number of free spins or the multiplier can go.

The action is The Vault slot plays out on a classic 5 reel, 3 row machine which offers 20 paylines. A win is formed by getting 3 or more matching symbols from left right (starting from reel 1) on any of the 20 paylines. Stakes start at 20p per spin, rising to a maximum of £20 per spin.

There are few more high risk, high reward occupations than jewel thief. The risky theme of the slot is evident in the variance here. The Vault volatility is extremely high. As a result, the max payout is 5,000 x your bet. Volatile it may be but The Vault RTP of 96% stacks up pretty well.

You can play The Vault slot on a mobile device as on a laptop or computer. The contrast between the dark backdrop and the silver and gemstone symbols makes everything in The Vault mobile nice and sharp. The simple features make the transfer to handheld devices smoothly too. No grumbles here. The visuals in The Vault are very impressive. There’s a high spec look to the imagery which wouldn’t look out of place in a Hollywood heist movie. The setting is a fictional Parisian museum at night.

On the reels you’ll find silver A to 10 values alongside a pile of gold bullion bars, a green ruby and a white gemstone. The most rewarding of the standard symbols is the pink diamond. Land 3, 4 or 5 of these on a payline and you’ll pocket a reward of 2.5, 12.5 or 100 times your total bet.

The golden W is the wild. This substitutes for everything apart from the bonus and can land on all 5 reels. Like the pink diamond, it can offer awards of up to 100 times your bet per payline.

The free spins round takes place in museum’s vault where the pink diamond gives off a dazzling glow. It’s all very well done and has a real high-tech feel. The smoke alarms, blaring sirens, blue lights and helicopter noises as the bonus round nears its conclusion really ramp up the atmosphere too.

For all its high-tech bells and whistles, The Vault is actually a rather simple slot. The package of extras on offer in the bonus round isn’t massively original. The combination of free spins, an expanding multiplier of at least 3x plus a stacked wild reel in play throughout is an appealing prospect though.

Be warned though. This isn’t a slot for the faint of heart. The action here is extremely volatile. If you’re trying to eke out plenty of play from a limited bankroll, it might not be the best choice.

If on the other hand, you like the thrill of high-risk action that has the potential for big rewards, then joining Jewel and trying to break The Vault is a very playable option. If you fancy another heist, you could play the Royal Mint Megaways slot by Big Time Gaming which is based on the building where money is printed.

❓ Is The Vault a volatile slot?

Yes, extremely. As you might expect from a slot with a crime theme, The Vault delivers high risk but potentially high reward action. The variance here is very high indeed.

🥇 What is The Vault slot max win?

You can win up to 2,000 x bet on each spin or free spin – with the increasing multiplier in the free spins, the max payout can reach 5,000 x your bet.

🎰 Can you play The Vault on mobile?

The Vault is available to play on mobile devices. The slick visuals and the dark museum backdrop work especially well on handheld devices

⚡ What is The Vault slot RTP?

The Return to Player rate of The Vault is 96%. That stacks up pretty well compared to many other slots. Considering the high variance, it’s not a bad number. It has a hit frequency of 1 in 5 spins.