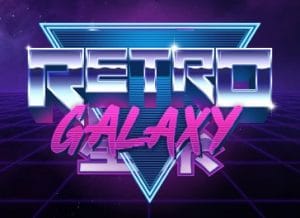 WHERE TO PLAY Retro Galaxy SLOT

Blast off into space for a sci-fi adventure in the Retro Galaxy slot, a 5 reel, 243 ways to win game from Half Pixel Studios and Microgaming. Bright and colourfully designed, the action takes place using a rolling reels game engine where new symbols drop into place following a winning roll. Each rolling reel also brings a multiplier into play. Trigger the Free Spins feature for free spins with multipliers that can send payouts rocketing by up to 15x. The maximum payout stands at a cool 7,300 x your bet per spin. Found out more about this volatile slot in our detailed Retro Galaxy review.

The Retro Galaxy slot is played using a 5 reel, 243 ways to win machine. Winning combination are formed by landing 3 or more matching symbols or wilds on adjacent reels, starting from the leftmost reel.

You can blast off here are bet levels that range from between 20p and £20 per spin. You can set 10, 25, 50 or 100 autospins complete with win, loss and feature stop limits. There’s also a quick spin option via the settings.

The Retro Galaxy RTP is 96.05% which is reasonable enough. The variance here is high too. Retro Galaxy is a volatile slot. There is the potential for big rewards though with the maximum payout standing at 7,300 x your bet on each free spin. With a space theme, pastel shades and neon imagery dominate the design in the Retro Galaxy slot game. This is what the future was meant to look like from the viewpoint of the 1980s. The bright, colourful imagery certainly lives up to its retro billing. The same is true of the electro soundtrack. It’s all slightly old fashioned but it works very nicely.

With stars and swirling galaxies in the background the reels are made up of neon A to 10 symbols which appear alongside futuristic looking lightning bolts, stars, bars, lucky 7s and a prism which pays 30 x your total bet if you land 5 in combination. There’s also a wild that can hit anywhere apart from reel 1.

The old school design and relatively simple gameplay are well suited to playing on a small screen device. The Retro Galaxy mobile slot is a very playable one. You won’t lose anything playing it on a mobile in comparison to a desktop device.

There’s plenty going on in Retro Galaxy in both the base game and the free spins round. Rolling Reels and expanding multipliers are the key to success in both.

After a winning combination is created, the winning symbols are blasted from the screen and new symbols drop down and replace them. A new payout consideration is made with the new symbols in position. If a new winner is created, the process is repeated. The reel rolls continue until no new winner lands. This is called the Rolling Reels feature and has been used in many Microgaming slots such as Thunderstruck II and Immortal Romance.

Get on a roll with the Rolling Reel wins and it brings the Multiplier Trail feature into play. The base game action starts with the standard 1x payout structure. On your first, second and third reel roll wins that multiplier increases to 2x, 3x and then 5x. Keep track of the multiplier via the meter at the top of the reels. The multiplier resets to 1x following a winless roll. The Free Spins feature starts with a 2x multiplier active. Each rolling reel win during the free spins increases the multiplier by 1x. Unlike in the base game, the multiplier doesn’t revert to its original state following an unsuccessful roll. It remains the same or rises.

The multiplier can reach a maximum of 15x during the free spins. Land scatters on reels 1, 3 and 5 on the same free spin and you’ll get another 5 free spins taking your potential total to 25.

The lively design and simple but volatile gameplay make the Retro Galaxy slot a very playable proposition. The neon imagery and synth soundtrack create plenty of atmosphere and the gameplay can really crackle, especially during the Free Spins feature where the multipliers can really get things moving.

Be warned though, the Retro Galaxy volatility is high. We wouldn’t quite say that this space adventure is out of this world. It’s perfectly entertaining though if you like this theme or you fancy playing a simple but high variance game. If you like rolling reels and increasing multipliers, it has a lot of similarities to NetEnt’s Gonzo’s Quest slot in terms of gameplay which offers bigger payouts (up to 37,500 x bet per spin).

What is the Retro Galaxy RTP?

The Retro Galaxy return to player rate is 96.05%. That’s in the average range for an online slot. It’s high variance though so you’ll get smaller wins most of the time. The bigger wins come from the various bonus features.

What is the Retro Galaxy max win?

Whilst this intergalactic adventure is a high variance game, the rewards from the Retro Galaxy slot can also be high. The maximum payout is a massive 7,300 x your bet per free spin.

Yes, trigger the Free Spins feature by landing 3, 4 or 5 scatters. You’ll get a payout of 2, 10 or 100 x your bet plus 10, 15 or 20 free spins. These are played using rolling reels where multipliers can reach up to 15x. Multipliers don’t reset following a unsuccessful reel roll either.

Where can I play the Retro Galaxy slot?