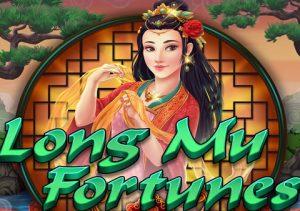 As its name suggests, Long Mu Fortunes is a Chinese-themed slot from Microgaming. Played using a 5 reel, 10 payline engine, it combines traditional design with a cracking range of extras. Look out for wilds that nudge to fill reels, hold in position then award a re-spin with a potential multiplier boost. There’s also a free spins round where nudging wild wins are trebled. Land the Grand Jackpot prize for a bonus of 5,000 times your bet. Play this volatile slot from between 10p and £25 per spin.

There’s a very traditional look to the reels in Long Mu Fortunes. On the reels you’ll see Asian-style A to J symbols alongside a drum, money wallets, gold coins and gold pots. The gold pots pay up to 50 times your bet for 5 across a payline. Central to much of the best action are the Red Dragon Wilds – these can appear on reels 2 and 4 only. When a Red Dragon Wild partially fills a reel, it nudges up or down and turn the whole reel wild.

Each time a Red Dragon Wild lands, you’ll trigger the Re-Spin feature – you’ll then receive a re-spin with the Dragon Wild locked in place. Joining the action here are 1x, 2x and 3x multiplier wilds that can land on reels 2, 3, 4 or 5. Once again, a multiplier wild that fills part of a reel will nudge to fill all of it. Another re-spin then follows. In fact, re-spins continue as long as a new winning combination is created. Land more than 1 multiplier wild and their values are combined.

The mysterious woman is the scatter. When she appears on reels 2, 3 and 4 on the same spin you’ll trigger the Free Spins feature. On offer here are 10 free spins. The re-spins are in play during this round too. Each multiplier wild trebles the payout. You can expect to see the re-spins land more regularly than in the base game.

Long Mu Fortunes also offers the chance to win a jackpot prize. Red Dragon wilds will collect coins which can randomly trigger the Jackpot feature. The Major pays 100 times your bet with the Grand Jackpot awarding a very tasty 5,000 times your bet.

If you enjoy high risk, high reward play then you won’t be disappointed with Long Mu Fortunes. This is an extremely volatile slot. Expect plenty of lengthy troughs. Get lucky with the re-spin multipliers, especially in the free spins round, and things can really get moving. Combine that volatile gameplay with the impressive, classical design and you have a very playable Chinese-themed slot.

However, there’s nothing in the Long Mu Fortunes slot that we haven’t seen elsewhere – there’s nothing unique. Microgaming offers you much better video slots with Immortal Romance and Lara Croft: Temples and Tombs recommended.