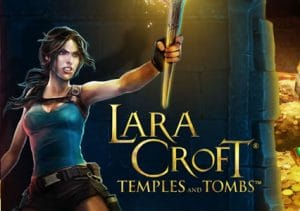 WHERE TO PLAY Lara Croft: Temples and Tombs SLOT

Join an adventurer on a quest for hidden Egyptian treasure in Lara Croft: Temples and Tombs. Created by Microgaming, this 5 reel, 243 ways to win video slot comes with Rolling Reels where each symbol drop win increases a multiplier by up to 5x. Trigger the free spins round and the multipliers are trebled and can reach up to 15x. You’ll also have a chance to land jackpot prizes of up to 5,000 times your bet. Play on all devices from between 20p and £20 per spin.

The design in this Microgaming video slot is nicely done. The setting is the dark interior of a temple. The symbols appear on stone blocks that drop down onto the reels on each spin. There you’ll find a selection of treasures, equipment, hieroglyphs and Lara Croft in an assortment of poses.

The Rolling Reels feature means that winning symbols are removed and new ones drop in from above and replace them. These keep on coming as long as a new winning combination is created. Each successive win also increases a multiplier. In the base game this starts at 1x then rises to 2x, 3x and 5x.

Lara Croft: Temples and Tombs also comes with a Free Spins feature. 8 free spins are awarded for every combination of 3 scatters that lands meaning you could start with up to 32 free spins. The Rolling Reels are in play during these free spins. They can deliver much bigger multiplier rewards though. Instead of 1x, 2x, 3x and 5x, the boosts are 3x, 6x, 9x and 15x. Re-triggers are possible too. If the scatters fall nicely, you can end up with a maximum of 48 more free spins (giving you 80 altogether).

There’s also a chance to unlock a potential jackpot prize in the Jackpot feature. Wilds that land are collected in a meter above the reels. The more wilds you collect, the better the chances of triggering the feature. The Mini, Major and Grand Jackpots award 15, 100 or 5,000 times your total bet respectively.

As you’d expect from a branded video slot, there’s a glossy, high spec look to the design here. There’s a decent variety on offer from the features though. It’s the Free Spins feature where the big multipliers can really have an impact. This is a volatile game so be warned. You can win 7,343 times your bet on each free spin though!

Lara Croft: Temples and Tombs is an impressive all-rounder. If you like high variance, ancient-themed, treasure hunting action, then it ticks all of those boxes. If you like branded games, our Movie Slots section is recommended – you’ll find titles like Vikings, The Goonies, Terminator Genisys and Jumanji