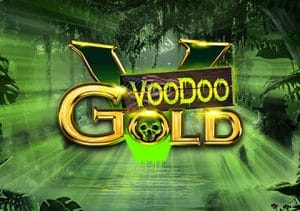 WHERE TO PLAY Voodoo Gold SLOT

A shaman hideout in the Louisiana swamplands forms the backdrop to Voodoo Gold, a black magic-themed video slot from ELK Studios. The base game action takes place on a 6 reel, avalanche reels game engine that offers 4,096 ways to win. The reels can expand up to 8 rows high though which delivers 262,144 potential winning opportunities. Look out for colossal symbols, bonus bombs which can create new tumbles as well as a free spins round. Play this volatile game from between 20p and £100 per spin.

Set against a swampy backdrop, you’ll see an assortment of voodoo-related symbols spinning around the reels. As well as appearing as standard 1×1 single symbols, they can also hit in bigger 2×2, 3×3 or even 4×4 formation. That 4×4 block is the equivalent of 16 standard symbols. Big symbols come in Voodoo State. This fills any empty spaces below with wilds. Big symbols can form part of winning combinations when they reach the bottom of the reels.

Land a winner and those symbols are removed with the Avalanche feature. New symbols drop down and a new payout calculation is made. Each successful avalanche results in 1 extra row being added to the reels. If they reach their full size, there are 262,144 ways to create a winner.

The Bomb feature is activated every time you land a Bonus symbol. The Bomb explodes at the end of that set of avalanches and opens a diamond formation of spaces which are filled by a new set of symbols. A new payout calculation then follows.

The Dual Bomb feature, is triggered by, you’ve guessed it, landing 2 Bonus symbols on the same spin. A line is drawn between the 2 Bonus symbols. All symbols touching this line (apart from wilds and big symbols) are blown up and a new avalanche takes place. All other instances of touched symbols elsewhere on the reels blow up too.

The Free Drops Bonus Game feature is triggered by landing 3, 4, 5 or 6 Bonus symbols on the same spin. This can be on a single spin or via Bomb or Dual Bomb avalanche. You’ll then receive 6, 9, 12 or 15 free spins. Each win in the free spins round pushes the safety level up 1 row and increases the number of ways to win.

Once again, you could end up spinning with 262,144 ways to win active – even if you don’t get a winner, the number of rows/ways to win won’t revert to the standard 4,096 ways to win. Big voodoo symbols fill spaces below with wilds. Any wild that doesn’t form part of a winner turns sticky. You can also win more free spins to give you 30 altogether.

We expected a video slot with this theme to be rather fiery and Voodoo Gold doesn’t disappoint on that score. This is a high variance game. The avalanche reels, wild extras and bonuses deliver plenty of potentially explosive action. If you fancy a wild, volatile game then Voodoo Gold hits the target. You can also win up to 5,000 times your bet on every free spin.

Voodoo Gold is the 3rd video slot from ELK Studios’ Gold series – the other 2 are Ecuador Gold and Tahiti Gold.