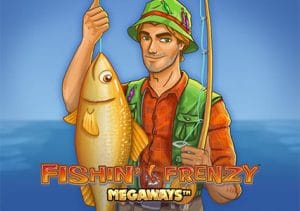 Blueprint Gaming’s sea angler is out for a second expedition in Fishin’ Frenzy MegaWays. Previously available as a 5 reel, 10 payline game, this new version is played using the shape shifting MegaWays game engine where the 6 reels can expand to offer up to 15,625 different ways to win. The other highlight is the Fisherman Free Games feature which awards up to 50 free spins where the angler wild can reel in plenty of fishy bonuses. Stakes in this high variance game range from between 10p and £10 per spin.

At first glance, there’s little difference between the 10 reel and the MegaWays versions of Fishin’ Frenzy. A closer look reveals a few changes though. First and foremost is the 6 reel set up. The number of symbols appearing on those reels changes with each spin- so does the number of MegaWays in play. If all 6 reels reach their maximum size the number of MegaWays reaches a massive 15,625.

Once again, the sea bed forms the backdrop to the reels. There you’ll find A to 10 royals as well as cartoon-style bait trays, life rings and fishing reels. Top of the standard payers is the seagull which pays 20 times your bet if you land 6 of them on adjacent reels. The angler is the game’s wild. He replaces everything bar the scatter.

You’ll also see a school of 7 different sized fish symbols. These can really come into their own during the Fisherman Free Games feature. To trigger that feature, you’ll need to land 3, 4, 5 or 6 of the speed boat scatter on the same spin. You’ll then play 10, 15, 25 or 50 free spins.

This is a volatile game so you can expect some lengthy spells between triggering the Fisherman Free Games feature. If you don’t want to wait, you can always pay and buy an immediate trigger. Just click on the Bonus Bet icon which also reveals the price – 100 times your bet.

The simple 10 reel version of Fishin’ Frenzy proved popular with video slots players. There’s a bit more going on in this MegaWays version but the design and features are actually pretty similar. The Fisherman Free Games feature has the potential to be a cracker, especially if the wild angler works his magic and reels in a whopper or 2 – up to 10,000 times your bet on each of them.

If you enjoy MegaWays video slots or you just enjoyed the original, then it’s worth setting sail for this updated Fishin’ Frenzy MegaWays. If you like fishing, IGT’s Lucky Larry’s Lobster Mania 2 is one to play.