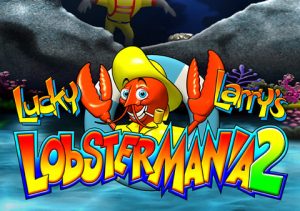 Our favourite bumbling New England fisherman is back, once again trawling for a huge catch of coins. Just like the original, Lucky Larry’s Lobster Mania 2 is a volatile 5 reel, 40 payline affair that’s brimming with features. Look out for stacked wilds, multipliers, a pick me lobster bonus, as well as a free spins round and 3 jackpots. Take to the ocean from between 60p and £300 per spin.

Developer IGT has retained many of the visuals that made Lucky Larry’s original ocean adventure such a hit. The imagery has a decidedly comedic feel – Deadliest Catch this ain’t. Look out for cartoon symbols including buoys, lighthouses, boats and beach houses on the reels as well as a playing card symbols.

Lucky Larry’s Lobster Mania 2 comes with a new progressive jackpot element which can hit in the base game (but not the free spins). Look out for the Jackpot symbol which can appear over any symbol apart from the bonus. Three or more Jackpot symbols on successive reels on any spin and you’ll be quids in thanks to 1 of 3 jackpot payouts.

The jackpots aren’t the only base game goodies to keep an eye on. Multiplier symbols can also hit to give your payouts a boost of 3x or 5x if they feature in a successful symbol combo.

Lobster Mania 2 also comes with a pair of bonus features which are triggered when you hit 3 or more Bonus symbols anywhere on the reels. Once active, you’ll be given the choice of Lucky Larry’s Free Spins or Lucky Larry’s Buoy Bonus 2.

If you choose the former, you’ll receive 5 free spins – that may seem a little skinny but the reels are richer and are boosted by the addition of stacked wilds which can really improve your chances of netting a big one. You can re-trigger up to 240 free spins here too.

The Buoy Bonus is a 2 stage, pick ’em feature. In part one, you have to pick a buoy from Larry’s boat which will give you an instant cash bonus. Things go international in part two with bonus rounds based on Brazil, Australia or Maine.

In the Aussie bonus choose from a selection of kangaroos – the goal is to try and pick the kangaroo holding the golden lobster Down Under. Manage this and you’ll pocket the Kangaroo Bonus and with it a cash prize of between 200x and 800x.

Brazil’s Octopus Bonus sends you under the waves where the aim is to try and find the treasure chest containing the golden lobster buoy. Prizes of between 200x and 1,000x are on offer if you do so.

The Pelican Bonus is set off the coast of Maine. Find the buoy with the golden lobster and a prize of anywhere between 160x and 625x will be yours. You’ll have three picks to try and find the big prize. You can choose to accept or refuse the amount won from your first two picks but you have to make do with the third though.

The features in Lucky Larry’s maiden voyage were decent enough but IGT has upped its game for the sequel. Like a journey in rough seas, expect some deep troughs as well as soaring highs. The waters in Lucky Larry’s Lobstermania 2 can be a little rough. This is a volatile slot and the variance is high. If your luck is in though, a bumper catch is certainly a possibility. If you like sea/ocean themed slots, I recommend you try IGT’s Pacific Paradise which is also highly volatile.