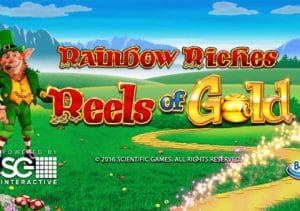 WHERE TO PLAY Rainbow Riches Reels of Gold SLOT

Hope for a little of the famous luck of the Irish in Rainbow Riches Reels of Golds, a 5 reel, 100 payline video slot from Barcrest. Once again, the lucky leprechaun is central to proceedings in this fortune themed sequel which comes with a host of bonus extras. Look out for colossal reels, super stacked, magic, expanding and bursting wilds as well as plenty of free spins. See if there’s gold at the end of this particular rainbow from between 10p and £500 per spin.

The set up on show in Rainbow Riches Reels of Gold is a little different from Barcrest’s usual offerings. The action plays out on 2 reel sets – on the left of the screen is a standard 5 reel, 4 row machine. On the right is a 5 reel, 12 row colossal reel set. It uses the Colossal Reels engine found in WMS video slots (as WMS/Barcrest as part of Scientific Games).

The symbols on show are reassuringly familiar though, comprising heart, club, spade and diamond symbols alongside a 4-leaf clover, horseshoe, toadstool, harp and rainbow. The most lucrative symbol is the leprechaun which awards 500 coins if you land 5 on a line. Better still, the leprechaun can land fully stacked to further boost your possibilities of creating a bumper winning combination.

The Rainbow Riches logo is the game’s standard wild, replacing all other symbols bar the scatter – land the wild symbol fully stacked on the main reel set and it will expand to fill the corresponding line on the colossal reel set, turning both wild and creating some fantastic winning potential.

The base game extras come courtesy of a fairy who floats onto the reels and delivers some magical extras with a wave of her wand. The goodies on offer are:

Near Miss Win feature – if the spin is a loser, the fairy can nudge the reels and in the process turn it into a winner.

Near Miss Free Spins feature – you normally need 3 free spin symbols to trigger the bonus feature. Land 2 though and the fairy can deliver a re-spin, giving another shot at finding that elusive third bonus symbol.

Reel Wins Multiplier feature – your winning payout is boosted by a multiplier of 2x, 3x or 5x.

Super Stacked Wilds feature – Rainbow Riches wilds will fill 1 of the reels on the main reel set and will then duplicate across to the equivalent reel on the colossal reels machine.

Magic Wilds feature – the fairy will slide wilds up and down certain reels before locking them into position where a new payout will be made.

Wild Burst feature – the fairy will give a quick swish of her wand to reveal a number of butterflies. These will land on both the main and colossal reel sets and turn those positions wild.

Wishing Well Bonus feature – all of the playing card suit symbols on both the main and colossal reel will turn into a wishing well symbol. Those wishing wells will then be transformed into a higher value mushroom, horse shoe, harp, shamrock or wild symbol.

Joining the 7 mini features is a traditional Free Spins feature which is triggered by landing 3 or more balloon bonus symbols anywhere on the reels. The precise number of spins awarded is decided by picking from a selection of balloons. The more scatters that triggered the feature, the more picks you’ll get. Cash prizes of between 10 and 200 times your total stake are also on offer from the triggering spin depending on how many balloon scatters you landed.

If you’re not impressed by the number of free spins you’ve been awarded, you can try and gamble and win some more – 5 dials will appear on the screen, each offering a different amount of spins, plus the likelihood of winning them. Pick from 1 of the 5 then spin the dial. If the pointer lands in the green, you win that number. If it lands in the red, you lose all of your free spins.

As in many other Barcrest powered games, Rainbow Riches Reels of Gold gives you the opportunity to play in Big Bet Mode. This is a series of 5 linked spins, played at much higher stakes than normal. In return, you’ll get access to some extra goodies:

The higher your stakes, the better the Return to Player % rate on offer. Play at £2 per spin or less and it stands at 94%. Up it to more than £2 per spin and it goes up to 96%. Play in Beg Bet mode and it reaches a far more impressive 98%.

There’s plenty on offer in Rainbow Riches Reels of Gold – what could have been a staid sequel offers something a little different thanks to the colossal reels. The magical fairy spices things up on a regular basis in the base game too courtesy of the 7 mini features. Throw in the potential of the free spins feature and this medium variance sequel is a worthy successor to the very popular original.