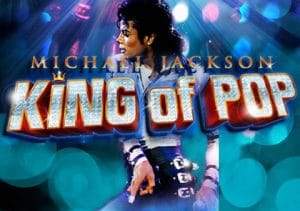 WHERE TO PLAY Michael Jackson King of Pop SLOT

Is the King of Pop also the King of Slots? Bally Technologies puts that idea to the test in Michael Jackson: King of Pop, a slot based on the life and music of 1 of the pop world’s greatest superstars. It’s a 5 reel, 25 payline game that comes with random and stacked wild base game features as well as free spins and spin the wheel features. Playable across all devices, get moonwalking from between 40p and £80 per spin.

Music themed slots are all the rage with video slots based on Guns N’ Roses and Jimi Hendrix hitting the virtual shelves. What they all have in common is a rocking soundtrack and that’s certainly the case with Michael Jackson: King of Pop. Spin away to a backing track that includes Beat It, Billie Jean, Dirty Diana, Bad and Smooth Criminal.

The imagery has a glossy sheen too – look out for shiny shoes, sunglasses, hat and the singer’s trademark white glove alongside the playing cards and wild. The top payer is MJ himself – land 5 of these in a payline for a 2,500-coin jackpot.

There are plenty of features to get stuck into in the King of Pop slot – first up in the base game are the Moonwalk Wilds which can land at random on reels 2 through 5 and transform up to 5 symbols into wilds. That’s not all though as any winning combination that includes a moonwalk wild will be boosted by a 2x multiplier. The other random base game extra is a stacked wild bonus which can land on any spin and turn up to 2 reels totally wild.

There’s also a spin the wheel style feature which is triggered when you land the bonus symbol on the middle 3 reels. Spin to earn cash prizes, cash prizes with an extra spin of a multiplier wheel or some free spins.

10 free spins are awarded if the pointer lands on the Beat It Free Games segment – the added extra here is a sticky wild. Every time one hits on reels 2, 3, 4 or 5, it will be stuck in position for the rest of your free spins.

If the wheel pointer lands in the Smooth Criminal Free Spins segment, you can look forward to 5 free spins, this time with dynamic wilds reels. Reel 5 will be wild on your 1st spin. On spin 2 it’s reels 4 and 5. On spin 3 it’s 3 and 4 and on spin 4 it’s reels 2 and 3. On the 5th and final free spin, reels 1 and 2 are both wild.

As you can see, there’s plenty of action on offer in Michael Jackson: King of Pop – the look and more importantly sound is top notch and will appear to Jackson’s legions of fans. The range of features make it very playable even if Jacko’s music doesn’t float your boat. Trigger the free spins with those extra wilds and you’ll find Michael Jackson: King of Pop anything but Bad!