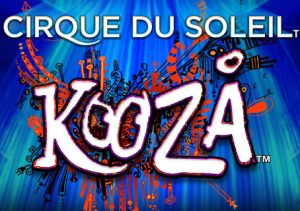 Created by Bally, Cirque du Soleil Kooza is a 5 reel, 40 payline video slot based on the hugely successful touring circus production. Boasting fantastic design, it comes with a pick me round, reels stacked with mystery symbols and a pair of free spin features with added symbol upgrades and multipliers. Head to the big top from between 20p and £400 per spin.

Like the circus show on which this slot is based, the design in Cirque du Soleil Kooza is top end. The reels feature A, K and Q values as well as a pair of masks. They’re joined by 4 characters from the show – Innocent, Chari, Skelly and Wheeler as well as a standard wild that replaces all other symbols bar the scatter and bonus.

Bally has obviously put plenty of effort into creating a great looking video slot – they’ve not neglected the bonus features though and there’s plenty to get stuck into.

Mystery Stacked Reels feature – on any spin, a reel or reels can be transformed with all the symbols replaced by the same mystery symbol. A new payout is then made with the identical symbols in place. Replicate the same symbol on multiple reels, especially the wild, and some great winning chances are available here.

Box Pick Bonus feature – land 3 of the safe symbol to trigger this pick me round. Just choose 1 of the 3 safes and you’ll win a cash prize of between 3 and 50 times your stake or a spin of the Bonus Wheel.

Bonus Wheel – as well as being triggered by the Bonus Pick, you can also activate the wheel by landing the Bonus symbol on the middle 3 reels on the same spin. Depending on where the pointer lands, you’ll be awarded a cash bonus, access to 2 free spins features or the jackpot.

Trickster Free Spins feature – after an initial payout of double your stake, you’ll be awarded 10 free spins. The character to look out for here is Trickster who can sneak onto the reels and upgrade the value of a random assortment of symbols. The Mystery Stacked Reels feature can hit during the feature to offer further winning chances.

Wheel of Death Free Spins feature – just like the Trickster Free Spins feature, a payout of double your total stake is awarded once you activate this feature. Here you’ll receive between 7 and 12 free spins. The extra wrinkle is the addition of multipliers that can double, triple or quadruple your payouts. Land 2 More Free Spins symbols and you’ll add to your initial tally of free spins – between 4 and 15 are on offer taking your potential total to 27. The Mystery Stacked Reels feature is in play here as well.

Jackpot Wheel feature – if the pointer lands on the jackpot when you spin the Bonus Wheel, you’ll trigger the Jackpot Wheel feature. Spin that to be in with a shot of winning a Mini, Grand, Colossal or Tres Magnifique jackpot.  The last one is the biggest offering you 500 times your stake.

Cirque du Soleil revolutionised the circus world – the Cirque du Soleil Kooza video slot probably won’t have that revolutionary effect but it’s still an entertaining and very playable offering, featuring quality design and a tidy range of extras. The variance is in the medium range, offering a balance of payouts.

Fans of Cirque du Soleil will want to take Cirque du Soleil Kooza for a spin – if you’ve never sampled the troupe outlandish and exotic delights, this game is a decent place to start. I also recommend you try Bally’s other branded title, Michael Jackson King of Pop.