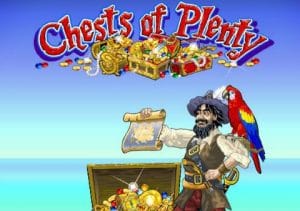 WHERE TO PLAY Chests of Plenty SLOT

Chests of Plenty is brought to you courtesy of Ash Gaming and has 5 reels and 20 slots. It has a pirate theme and a classic layout (much like a land-based slot game). Chests of Plenty has with a 10,000 coin jackpot which you can achieve if you get 5 Wilds (the Woman), and 2 other bonus features – you can play from just 20p to as much as £200 a spin.

The game also features a progressive jackpot element in the In-Reel Chest Bonus feature – this is triggered when you get 3 Chest symbols anywhere on the reels. You will see the 3 chests move to the middle of the screen and then open up to reveal 3 gems in each chest.

Getting the same 3 gems in a chest will award a prize. If the 3 gems are not the same, the chest will be finished and not open again. Saying that, if you get 3 of the same gems in a chest, that chest will continue to open until the 3 gems don’t match. If you are to trigger the jackpot, you must match all 9 gems – they need to be diamonds. The feature will continue as normal though and the progressive jackpot will be added at the end – can you imagine the waiting?!

In terms of Chests of Plenty features, the Girl symbol is the Wild (as mentioned above). The Pirate symbol is normal unless it’s to the left or right of a Girl symbol. If this is the case, the Pirate symbol will become a wild. If in-between 2 Pirates, they will both become wilds.

Each map has a trail around an island – the trail has different prizes as well as blank spaces, map pieces (which you use to go to the next map) and mystery spaces. You do this by spinning the wheel which has numbers from 1 to 7 and a Skull and Crossbones space. If you land here, winnings are collected and the bonus round ends. All wins from each map will be totalled and added to your prize fund. This can be extremely lucrative – if you’re lucky enough to get to the Jackpot Island Map, expect between 300 and 2,000 times your stake!

Chests of Plenty is a fun and entertaining slot game with the added extra of a progressive jackpot element. I found it to be a medium variance game meaning it’s nicely balanced. I found it to be better payouts wise than Leprechaun’s Luck or Adventures in Wonderland.