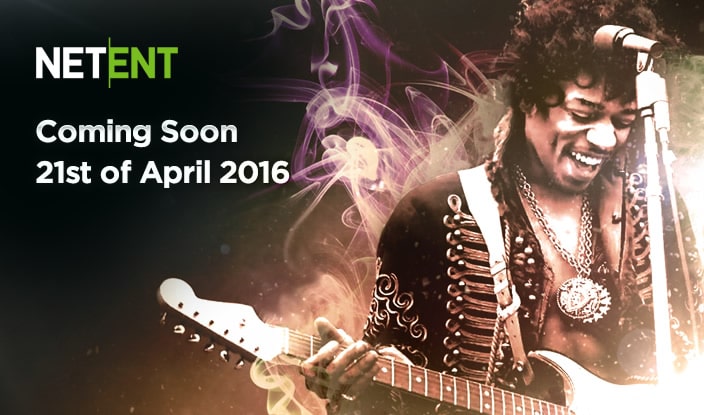 NetEnt has been exhibiting at ICE this week announcing that they will launch a Jimi Hendrix branded video slot in April 2016.

The ICE Totally Gaming 2016 convention take place this week in London with Net Entertainment announced they will launch a video slot dedicated to Jimi Hendrix – the game will be released on the 21st of April and will be the second rock-themed game launched this year after they released Guns N’ Roses last month.

Jimi Hendrix may have tragically died at the tender age of 27 but has inspired many musicians with his iconic guitar play and songs. He came to prominence in the 60s releasing 3 albums (Are You Experienced, Axis: Bold As Love, and Electric Ladyland).

The Jimi Hendrix video slot will include 5 of his infamous songs including Foxy Lady, Purple Haze, Crosstown Traffic and Little Wing. With 3D graphics and superb animations, Jimi Hendrix will be brought back to life in April 2016.

“Jimi Hendrix is indisputably one of the greatest rock stars that ever lived. It is an honour and a huge responsibility to be granted the rights to create a Jimi Hendrix branded product. Working together with the Hendrix family and their companies Experience Hendrix, L.L.C and Authentic Hendrix, LLC on this game will help make our NetEnt Rocks series one of the most desirable product offerings available.”

“We take enormous pride in the role we play in promoting Jimi’s art and persona.  Because of that, we are extremely selective in who we partner with. NetEnt, we feel, has an understanding of the importance and we’re thrilled to work with them. The prospects are exciting!”

NetEnt also announced it will release a third game in their NetEnt Rocks portfolio with a Motörhead video slot launching in September 2016. They already have plenty of branded content available with Aliens, South Park, South Park Reel Chaos, Scarface and The Invisible Man.

You can play all NetEnt slots at Mr Smith Casino who are fully UK focused and offer new players a 100% first deposit bonus up to £200. They also have games from WMS Gaming, Barcrest, Play ‘N Go, IGT, Microgaming, Bally, Quickspin, NextGen Gaming and many others with over 350 slots to choose from!