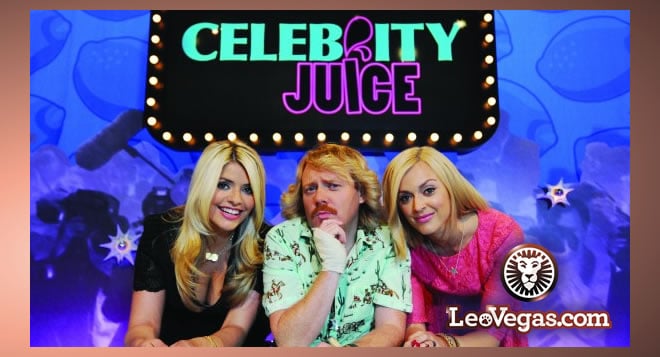 LeoVegas Casino has signed a deal to become the new sponsor of the hit ITV2 show, Celebrity Juice – the new series starts this coming Thursday.

Celebrity Juice is a celebrity comedy panel show hosted by Keith Lemon, an outrageous and hilarious TV personality which features many other celebrities. LeoVegas has sponsored truTV which is a comedy and competition channel but this will get them more exposure.

Taking over from Kellogg’s Squares, the sponsorship agreement begins with the new series which starts on Thursday the 10th of September. LeoVegas will be the sponsor for all episodes including the Christmas special as well as online and mobile streaming.

LeoVegas, the mobile casino brand, has signed up to be the new sponsor of Celebrity Juice, the primetime ITV2 celebrity comedy panel show. The series is in its 14th season and a very popular show for LeoVegas’ core demographic.

Jason Spencer, who is ITV’s business development director, commented by saying that “the last series of Celebrity Juice attracted 11.2 million viewers across the series with more than 16 per cent of those in the 16-34 age bracket.”

“Celebrity Juice is a fun and irreverent show, which fits the LeoVegas brand perfectly. Since launching in the UK last year TV has played an important role in our marketing activity and we’re confident that Celebrity Juice will help us introduce the key young adult demographic to the fun and excitement of LeoVegas.”

Celebrity Juice is sure to give LeoVegas a further boost to increase its ever-growing brand and reputation. Known and the king of mobile casinos, LeoVegas offers you a simple and superb offering if you like to play slots online. You have over 400 slot games from IGT, NetEnt, Microgaming, WMS, Barcrest, Play ‘N Go, NextGen Gaming and many others.

You can play new titles like NetEnt’s Dazzle Me and Microgaming’s Bridesmaids but you have some favourites like Barcrest’s Rainbow Riches, IGT’s Cleopatra, Microgaming’s Immortal Romance and NetEnt’s Gonzo’s Quest. I recommend the brand new Rainforest Dream by WMS.