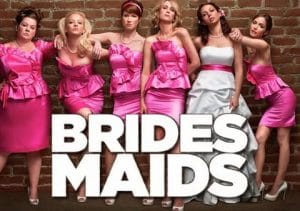 WHERE TO PLAY Bridesmaids SLOT

Bridesmaids is another branded slot which is brought to you by Microgaming. Released in August 2015, the game is all about the 2011 worldwide hit which is a romantic comedy and known mainly as a chick flick. The reels are what you’d expect with plenty of sparkles and diamantes as well as all 6 female characters from the film. Like with other slots by Microgaming, the game has footage from the Bridesmaids film which is found in the bonus features.

Anyway, the game has 5 reels and 40 paylines and can be played from as little as 40p a spin to as much as £60 a spin. Don’t let the female-orientated theme put you off as there are some good bonus features to play. Central to the game is the Wheel Bonus feature which is triggered when 3 or more Cupcake scatter symbols appear anywhere in view.

You will come across a large Bonus Wheel where you spin the wheel to win 1 of 15 prizes – 10 of these are cash prizes, 1 Wedding Jackpot prize and 4 bonus features which are described below. However, firstly you have the Cupcake Booster where you pick a cupcake to reveal 4 different prizes.

Here you will get 10 free spins with wins paying both left to right and right to left. Look out for Stacked symbols and Friendship symbol combinations – Annie is stacked on the first 2 reels, Helen is stacked on reels 4 and 5 and Lillian is stacked on the middle reel. You can get up to 20 free spins in total (1 retrigger available) but more importantly you can win up to 1,750 times your bet!

You will be awarded 10 free spins but you can win big with Rolling Reels and Growing Wilds. Rolling Reels are found in other Microgaming slots such as Avalon II – when you have a win, contributing symbols are replaced by new ones giving you the chance to win time and time again. Growing Wilds stacks increase 1 wild per spin with 13 wilds on offer. The maximum to be won is 1,200 times your bet in this feature.

This feature is a little simpler as you match Bridesmaids to win cash prizes. Look out for the 2 random Bridesmaids which come with multipliers – if you match these, an extra multiplier is added. The longer you don’t match Lillian, the longer the feature goes on with up to 66 times your bet to be won.

As you can see, the big wins will come from the 2 free spins features – the Bridesmaids slot won’t appeal to quite a few male players but if you look past the theme, it’s actually quite a decent game in my opinion – it’s nicely balanced variance wise too. If you want branded slots which are based on popular films, Microgaming has developed quite a few with Jurassic Park being the pick of the bunch. Alternatively, Playtech offer Marvel slots with The Avengers being the best one in my opinion.