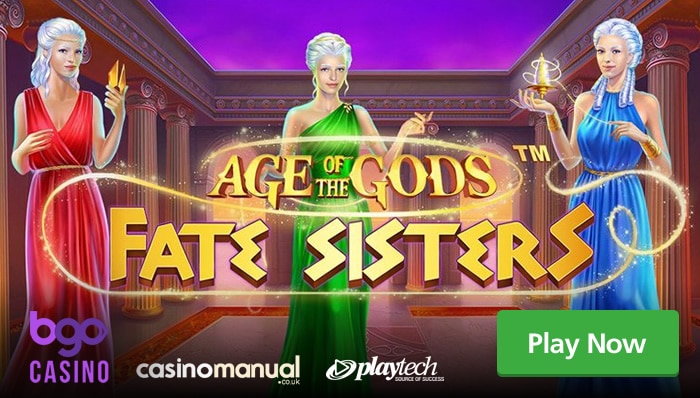 Playtech has released their 6th Age of the Gods video slot – read all about Fate Sisters as you join Clotho, Lachesis and Atropos in a quest for ancient Greek riches.

Age of the Gods Fate Sisters is the final Age of the Gods video slot to be released (according to my sources) and has 5 reels and 25 paylines. Playable from 25p a spin on desktop, mobile and tablet devices, the game has an ancient Greek mythology theme.

The game is centered on Clotho, Lachesis and Atropos (the Fate Sisters) who determined the fates of mortals, Gods and Titans. Clotho began lives and Lachesis determined what events happened in one’s life – Atropos was responsible for death.

The Fate Sisters all feature in the Fates’ Portal Free Games feature where each sister has their own free spins option with varying characteristics – here are the details:

Finally, there are 4 progressive jackpots to be won – randomly. If you’re lucky enough to enter the Jackpot Game, you are guaranteed to win 1 of 4 jackpots – the Ultimate Power jackpot is just over £323,000! For full details, and to play for free, read the Age of the Gods Fate Sisters video slot review.

The new Playtech title can only be played at bgo Casino (for a week or so) – you are welcomed with 20 Starburst free spins when you sign up and an exclusive 200% match bonus up to £400. Use the bonus code 400NEW in the Casher to claim this offer. Once you deposit, you will get 180 extra Starburst free spins.

Play Age of the Gods Fate Sisters only at bgo Casino