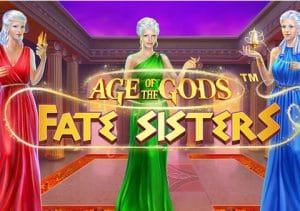 WHERE TO PLAY Age of the Gods Fate Sisters SLOT

The incarnations of destiny take centre stage in Age of the Gods Fate Sisters, a Greek myth themed video slot from Playtech. It’s a 5 reel, 25 payline game which offers free spins with dynamic multipliers as well as random and sticky wilds. There’s also a chance to win a life-changing score via the progressive jackpot feature. Play from between 25p and £250 per spin.

As we’ve found in the other video slots in the Age of the Gods series, no expense has been spared on Fate Sisters – a celestial temple forms the backdrop to the reels which include a selection of ancient objects alongside Lachesis, Clotho and Atropos, the Fate Sisters. They’re joined by a coin which is the game’s wild, substituting for everything apart from the scatter – 5 of these in a line will get you a massive haul of 10,000 times your line bet.

The blue vortex symbol is the scatter – 3, 4 or 5 of these anywhere on the reels will get you a payout of 3, 10 or 100 times your stake. They will also trigger the Fates’ Portal Free Games feature. Once active, you’ll be given the choice of 3 free spin features, each based on a different sister:

There’s one other base game extra to report – the Sisters’ Gift feature. It’s a re-spin which is triggered when Lachesis lands anywhere in reel 1, Clotho anywhere on reel 3 and Atropos anywhere on reel 5. The Fates will be frozen in position for the subsequent re-spin. They pay out scatter style on that re-spin too.

There are chances to win life-changing sums of cash on Fate Sisters too courtesy of the progressive jackpot – triggered at random on any spin, you’ll be given the choice of 20 gold coins. Find 3 of the same and that’s the jackpot you’ll win. You’re guaranteed to land at least 1 of the 4 jackpots on offer once the round has been triggered.

Age of the Gods Fate Sisters is another impressive effort from Playtech – matching excellent design with a nice array of features, it’s a very playable game. The Greek myth theme is an old one but as long as Playtech keeps coming up with innovative updates, we’ll keep on enjoying our trips back to the age of antiquity.

On the variance scale, we found it to be in the medium range – the Free Games feature was something of a feast or fortune affair. We hit it on a regular basis and the rewards ranged from the miniscule to the seriously impressive. If you like free spins features, Age of the Gods has the best one going.