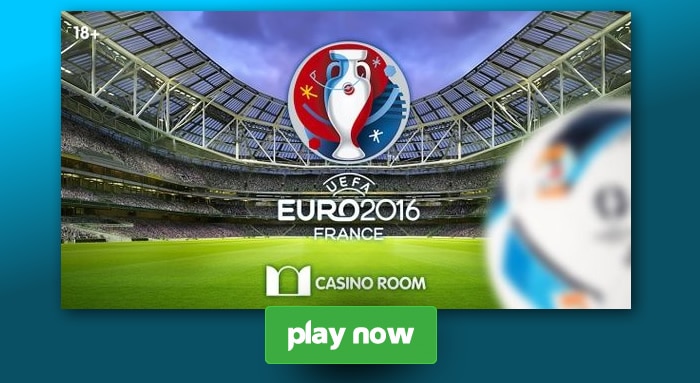 CasinoRoom are celebrating the upcoming Euro 2016 football tournament with up to 300 free spins on the popular Starburst video slot.

The promotion is only valid until tomorrow (Friday the 10th of June 2016) so you need to be quick – place your bet on which country will win Euro 2016 for your chance to win up to 300 free spins. All you need to do is place a bet of £10 using the code of the country/team that you think will win Euro 2016.

If your choice wins Euro 2016, you will get free spins – simple. Some teams offer as many as 300 free spins and some offer as little as 20 free spins as they are ranked in terms of winning potential. Here are the codes (within brackets) and the free spins won if your team wins:

So if you were to pick England (and we avoided a penalty shoot-out throughout the tournament!), you would receive 60 free spins on Net Entertainment’s Starburst. I personally would go for Spain as they have a point to prove after exiting the 2014 World Cup in disappointing fashion – they still have most of the players that won them the 2010 World Cup and Euro 2012 and have a few exciting players.

Haven’t got an account at CasinoRoom yet? Sign up now to get 20 Starburst no deposit free spins for starters. Then there’s a 100% first deposit bonus up to £500 and a further 180 Starburst free spins once you’ve deposited (credited 20 per day for 9 days).

They offer Microgaming and Net Entertainment slot games with favourites including Immortal Romance, Thunderstruck II and Gonzo’s Quest. If you want to get in to the football fever, you can also play NetEnt’s Football: Champions Cup.