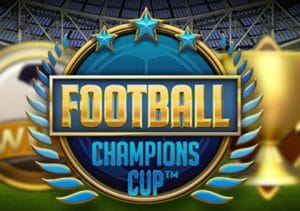 The highest profile event on the 2016 sporting calendar is undoubtedly football’s European Championships in France and NetEnt is getting into the spirit with the launch of Football: Champions Cup. It’s a 5 reel, 20 payline slot that offers overlay wilds, a pick me feature as well as a free spins feature that gives up to 24 free spins. Playable across all devices, spin away from between 20p and £100 per spin.

NetEnt slots are usually glossy affairs and Football: Champions Cup is no exception. Symbols on show include a ref’s whistle, a goalkeeper’s glove, a football boot, a shirt and a player which offers a 1,000 coin payout if you find 5 in a payline. The golden football is the game’s wild – keep an eye out too for the overlay wilds which can appear at random on reels 2 through 5 and provide you with a tidy little payout.

Football: Champions Cup comes with 2 main bonus features. Land 3 or more of the Bonus symbol to trigger the Bonus Game feature. It’s staged in a penalty shootout format (which hopefully won’t frighten off too many England supporters!). You take the role of the penalty taker in part 1, placing your shot in 1 of 4 positions in the goal. If you score, you win a cash prize. Just like in real football, you’ll have 5 penalties to take.

In the second part, you get to play the goalkeeper (hopefully more Manuel Neuer than Peter Shilton). Save a penalty and you can look forward to a multiplier which will be applied to the cash won from part 1 of the contest. The multiplier depends on the number of bonus symbols that triggered the feature. It’s between 1x and 12x for three bonuses. Between 3x and 14x for four bonuses and between 5x to 15x if you triggered the shootout with 5 bonuses.

Hit the scatter on reels 2, 3 and 4 and you’ll activate the Free Spins feature which is based on the knockout stages of a football tournament. Try and safely navigate your way from the last 16 through to the quarter final, semi-final and final and hopefully the title!

The round begins with 6 free spins. Hope to see the blue wilds land on the reels you’ll score a goal. If a red wild lands, you concede a goal. If you score more goals than the opposition, you’ll win the game, go through to the next round and get 6 more free spins.

The same process follows in the quarter, semi and final. Lose in the semi and a consolation prize of 6 extra spins are awarded. A 500x bet multiplier is on offer if you get all the way and lift the trophy!

Penalty shootouts have been a source of terror for England fans for years now – the 1 on offer in Football: Champions Cup should be much more to their liking. Likewise, the Free Spins feature which offers plenty of chances to progress the latter stages of the tournament.

Rather like England’s form in big tournaments, sporting theme slots can be a little patchy, promising much but failing to deliver. Football: Champions Cup is among the better ones. It’s probably not an overall tournament winner but should give you plenty of thrills along the way.