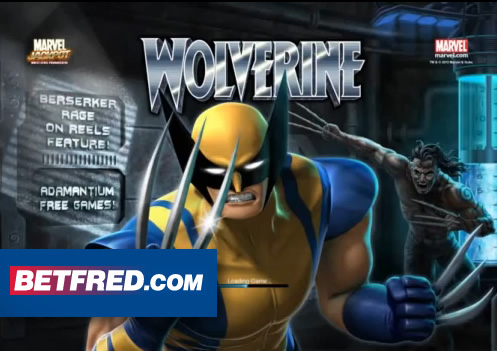 If you’re a Marvel slots fan, you will delighted to know that Playtech will be launching a Wolverine slot game – read about the game below and watch a video preview.

The Marvel slots are probably the most popular group of online slots you can play right now – this is due to their superb graphics, animations and above all, bonus features. They all have 4 progressive jackpots to be won too (which helps!).

The next Marvel slots to be released are Ghost Rider and Thor which are expected to be released before Christmas – however, no official launch date has been mentioned. I managed to stumble upon a video preview of the upcoming Wolverine slot game though – I personally can’t wait for this.

The Wolverine slot seems to have stacked wilds in the base game which is good. I also noticed the Berserker Rage feature where Wolverine will turn a certain number of symbols wild. In the video, Wolverine turns 2 reels completely wild – this is reminiscent of the Wildstorm feature from Thunderstruck II – no idea how well it pays out just yet.

There is also a Adamantium Free Games feature where you appear to receive 12 free spins. If you get the syringe symbol, the adamantium level goes up by 1 in the meter on the left. Each adamantium level can freeze the Wolverine symbols appearing on the screen for the next spin. It seems like the number of wilds you can potentially get in the free spins feature is big with big wins to come from it hopefully.

As mentioned, there is no scheduled date for launch but Thor and Ghost Rider will be out next. The first online casino to offer these slots will be Betfred Casino – they have some sort of agreement in place where all Playtech slots are released first. They have released The Sopranos, Plenty O’ Riches, Sultan’s Gold, Daring Dave & The Eye of Ra and Cowboys & Aliens before anyone else.

Via CasinoManual.co.uk, Betfred Casino offers you an exclusive 100% welcome bonus up to £100 – whilst it may not sound very exciting, this first deposit bonus is fully cashable meaning that you can withdraw the bonus once you complete the wagering requirements. The standard bonus doesn’t allow this.