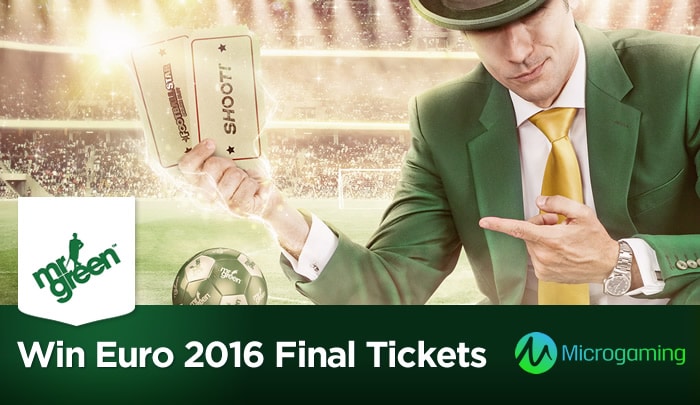 Fancy winning tickets to the Euro 2016 final in Paris? All you need to do is play either of 2 Microgaming-powered football-themed video slots at Mr Green Casino.

The promotion runs until the 27th of June (2016) so there’s plenty of time to enter – all you need to do is play Football Star or Shoot. Both powered by Microgaming, they are football-themed video slots which are appropriate for the upcoming Euro 2016 football tournament which kicks off tomorrow.

As for the eligible video slots, Shoot is an old game which has be re-released – with 5 reels and 50 paylines, its based on the iconic football magazine. Including legendary players such as Maradona, Pele and Cryuff, you can play from 50p per spin.

Football Star has 5 reels and 243 ways to win and can be played across all devices from 50p per spin. It uses the Rolling Reels feature meaning you can win again and again from every single spin. With stacked wilds on reels 2, 3 and 4, there’s plenty of potential to win.

There’s a Striking Wild Bonus feature where a striker appears turning 1 reel completely wild. However, it’s all about the Free Spins feature where you can get up to 25 free spins. The Rolling Reels feature applies but consecutive wins increases the multiplier up to a massive 10x! With wins of over 2,000 times your stake, check out the Football Star video slot review.

CasinoManual.co.uk readers are welcomed with an exclusive 20 no deposit free spins on NetEnt’s Jimi Hendrix and a 100% first deposit bonus up to £100. Once you deposit, you will get 100 Marvellous Mr Green free spins (which is exclusive to Mr Green).