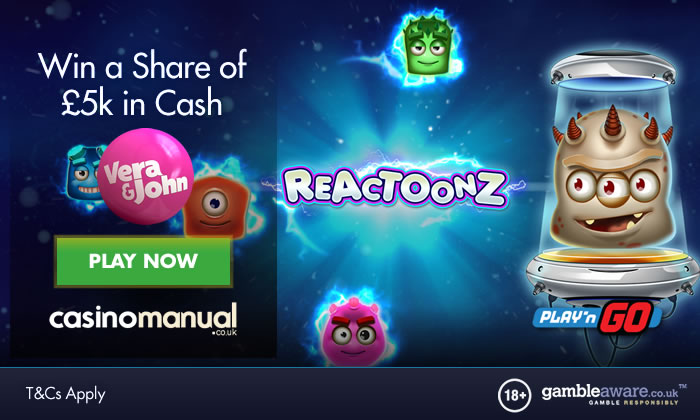 One of the most popular recent arrivals to the online casino world’s virtual shelves has been the science-themed Reactoonz. You can now take the game for a spin at Vera & John Casino and try and win a share of £5,000 thanks to a special Reactoonz Tournament.

Log in and get spinning on Reactoonz at Vera & John Casino between now and the 1st of November (2017) to be in with a chance of winning a prize. Players will earn a point for every £1 wagered during the qualification period – the top 100 finishers on the leaderboard will each win a prize with the overall tournament winner pocketing £1,000 in cash.

If you’ve not yet sampled the delights of Reactoonz then you’re missing a treat. Created by Play ’N Go, it’s a superbly designed cascading reels video slot that’s played on a 7×7 grid. Winning combinations are created by landing clusters of 5 or more symbols.

After each win, the successful symbols are blasted away with new symbols replacing them. The cascades continue as long as a new winning combination is created. Each winner fills up a light on 1 of the meters to the side of the reels. Fill a meter and you’ll get a modifier extra that awards between 3 and 6 extra wilds, symbol transformations, a new cascade or mirrored symbols.

Fill all 5 meters to trigger the Gargantoon feature – this three-eyed alien brings a giant 3×3 wild into play. When no more cascades are possible, it morphs into a pair of 2×2 symbols. When no more cascades are possible from the 2×2 wilds, it transforms into 9 1×1 symbols. The Gargantoon can also randomly add between 4 and 8 wilds if you have a winless spin.

Land a 2×2 square combination of matching symbols also creates a Gargantoon. If this makes up part of a winning combo that payout is doubled. Finally, a single one-eyed alien is nominated a fluctuating symbol on each spin. If it forms part of a winner, the it leaves a pair of wilds in its wake once it’s destroyed in the cascade.

Reactoonz is the sequel to the Energoonz video slot which proved a big hit with slots fans looking for something a little different. Reactoonz should do much the same – it also offers you wins of up to 4,570 times your stake on every single spin!

Why play at Vera & John Casino?

Take it for a spin at Vera & John Casino and you could get yourself a grand. New players at the sign are eligible for an exclusive 200% bonus up to £100 plus 10 bonus (free) spins every day for 10 consecutive days. There’s also bonuses on your 2nd, 3rd and 4th deposits with a total of £600 in bonuses up for grabs.

If you love your video slots, you’ll be happy to know Vera & John Casino offer you more than 750 games to play – they have all the latest additions including Thunderkick’s Pink Elephants, Lightning Box Games’ Five Pirates and NetEnt’s Planet of the Apes.

Take me to Vera & John Casino