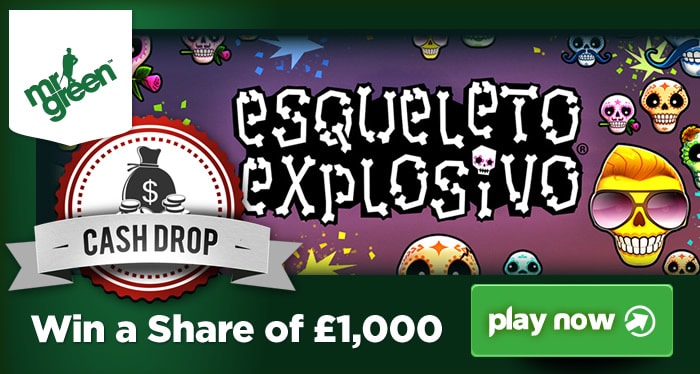 Mr Green Casino are offering up to £1,000 in cash drops today – all you need to do is play Thunderkick’s Esqueleto Explosivo.

The 20 lucky winners are randomly chosen with the cash being credited to their accounts the following day, by 1pm UK time. It’s that simple – play the game and you could win up to £250 in cash.

Esqueleto Explosivo is brought to you by Thunderkick and is a 5 reel, 17 payline slot which can be played from 10p a spin. Playable across laptop, PC, tablet and mobile devices, the theme is Mexico’s Day of the Dead. With a mariachi soundtrack and colourful graphics, it’s all about instrument-playing skulls.

You will notice the reels don’t spin as it has dropping symbols. When you have a winning combination, the contributing symbols disappear to be replaced by new ones. The Mucho Multiplier applies with a multiplier up to 32x multiplying your wins!

There is an Explosivo Wild (in gold) which blows up 8 symbols giving you 8 new ones – the multiplier increases as a result automatically increasing your chance of winning big. For more details and to play for free, check out the Esqueleto Explosivo slot review.

Not played at Mr Green yet? You are welcomed with an enhanced, and exclusive, 100% match bonus up to £200 as well as 100 free spins once you deposit. They have slots from a whole host of suppliers with IGT’s Pacific Paradise, Play ‘N Go’s Eye of the Kraken, Microgaming’s Titans of the Sun Hyperion and NetEnt’s Hook’s Heroes being recently added.

Get Your Share of £1,000 + Exclusive Welcome Offer at Mr Green Casino