January 2020 Win a London Theatre Trip or Share of £27,500 with The Phantom of the Opera Launch 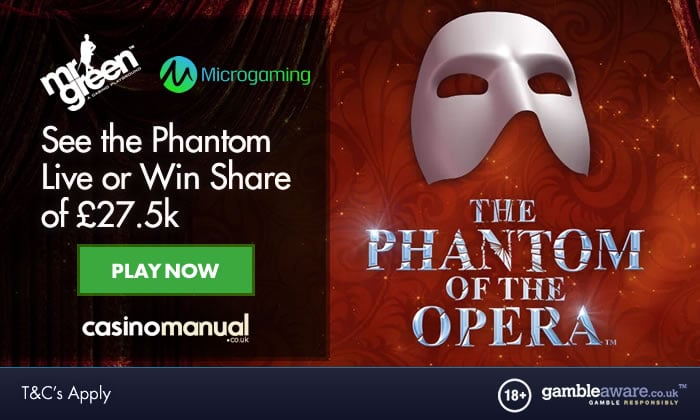 Mr Green Casino is celebrating the arrival of Microgaming’s The Phantom of the Opera video slot by hosting its own ‘SlotOpera’ which will award £27,500 in cash plus a luxury London theatre trip.

To be in with a chance of winning a prize, just get playing on the recently released The Phantom of the Opera – every £20 wagered between now and the 12th of November (2017) will get you a ticket into the special draw where the cash and prizes will be awarded.

What can I win?

The Grand Prize offers a once-in-a-lifetime experience for a theatre lover. Included are return travel to London, 3 nights’ accommodation (plus breakfast) at the ‘Rubens at the Palace’ Hotel, a pair of top-graded tickets to a theatre show; pre-theatre dinner for 2 (including a glass of bubbly), a panoramic viewing experience, a London tour bus (and they don’t mean the 333 to Tooting Broadway), tickets to 1 of London’s biggest tourist attractions plus a £250 gift card.

There are plenty of other prizes on offer here too:

All of the prizes are in cash and don’t have any play through requirements. Special Cash Drop prizes will appear at random in players’ accounts. You have to have played on The Phantom of the Opera that day to be eligible for 1 of these drops.

About The Phantom of the Opera

Even if there weren’t all these goodies on offer, The Phantom of the Opera would still be worth a spin. Based on the 2004 film adaptation that starred Gerard Butler as the mysterious masked man, this 243 ways to win game from Microgaming comes with photo-style imagery from the movie and plenty of extras.

Triggering in the base game are Chandelier Bonus feature which can turn 2 or 3 reels wild or the Letter Bonus feature awards instant cash prizes of up to 20 times your stake.

Free spin fans are well catered for too. There are 2 bonus rounds, both of which award 10 free spins initially complete with modifiers such as added wilds, wild reels and multipliers.

Boasting high spec design and some of the film’s famous show tunes, Microgaming has put together a fine looking video slot. The features stack up well too. Even if a night at the theatre sounds like your idea of hell there’s enough on offer to make The Phantom of the Opera a very playable option.

Take it for a spin with Mr Green Casino and it could get you all the way to the West End – new players can join the gentleman gambler with an exclusive 20 no deposit Starburst free spins, a 100% bonus worth up to £100 as well as 100 free spins. You’ll also get another 5 free spins, every day for the 20 days that follow.