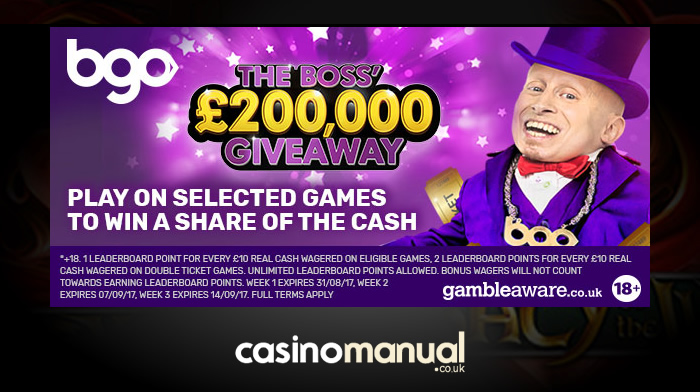 The Boss at bgo Casino is feeling particularly generous at the moment and will mark the approach of autumn with a massive giveaway that will see 11,000 lucky winners share a monster prize pool of £200,000 in cash!

That bumper award will be made in 3 weekly prize draws which run between now and the 15th of September (2017). To be in with a chance of winning your share, just get spinning on 1 of the recently released video slots from Playtech that have just hit the shelves at bgo Casino.

Every £10 wagered on Tiki Paradise, Monty Python & The Holy Grail and Ice Cave will get you 1 ticket into that week’s prize draw. You can boost your winning chances by playing 1 of the special Weekly Double Ticket games. The nominated games and dates can be seen below:

Every £10 wagered on these games during the dates shown will get you 2 tickets into that’s week’s prize draw. For example, stake £30 on Legacy of the Wild on the 29th of August (i.e. today) and you’d get 6 tickets into the weekly draw. Those weekly draws take place within 48 hours of the closing date.

That’s over 11,000 and £200,000 to be awarded between now and the middle of September. All of the prizes are in cash too so you won’t have to worry about any play through requirements.

Your first port of call this week call this week should be Legacy of the Wild which is offering double tickets. It’s a magic and sorcery-themed video slot from Playtech that comes with a 40 payline game engine, collapsing reel re-spins, expanding wilds and a feature that awards up to 50 free spins.