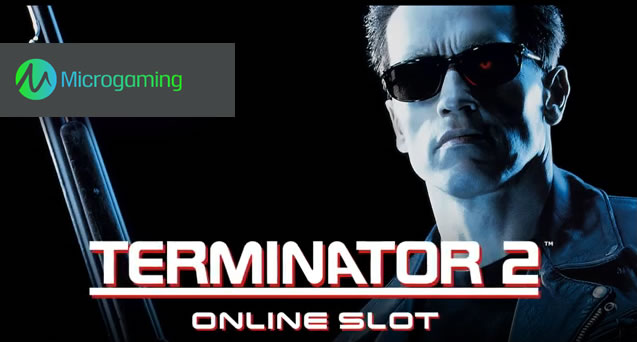 Microgaming’s upcoming blockbuster slot, Terminator 2, will be released soon but a video preview is now available to watch – read about the game below and watch the sneak preview.

Terminator 2 is surely going to be a big release as the film was a huge hit when released back in 1984 – it starred Arnold Schwarzenegger and make him a household name around the world as a result. Directed by James Cameron, the film is based on Sarah Connor and her John as they try to stop T-1000 killing the son as he is set to become the leader of the human resistance to machines in the future. The slot game features clips from the film in both the introduction and throughout the game with all the famous one-liners used by Arnie.

Terminator 2 will be a 5 reel 243ways to win game which can be played from 30p a spin. When you have a non-winning spin, you can trigger the T-800 Vision feature at random. This will award a cash bonus for high end character symbols. Look out the for T-1000 symbol as it’s the most rewarding and will trigger the Free Spin feature.

The Free Spin feature allows you to win nearly 3,000 times your stake – you will receive 10 free spins. The layout changes as you will see a 5x4reel set with 1,024 ways to win. Look out for the T-1000 symbol as this will change into any other character symbol awarding you the best win possible. Anyway, to see the Terminator 2 slot in action, watch the video preview below:

Microgaming will also be releasing a Game of Thrones slot later in the summer – that will be a big game too. In the last few days, they have released both Girls with Guns Frozen Dawn and High Society which can be played at CasinoRoom. The instant play casino has over 200 slots with games from Microgaming and Net Entertainment mainly.

If you sign up via CasinoManual.co.uk, you will receive an exclusive 100% first deposit bonus up to £300 plus 120 free spins on NetEnt’s Starburst once you deposit – the free spins are worth a nice £12 and credited the day after you deposit. You need to enter the bonus code BONUSCR when you sign up to claim this exclusive offer.