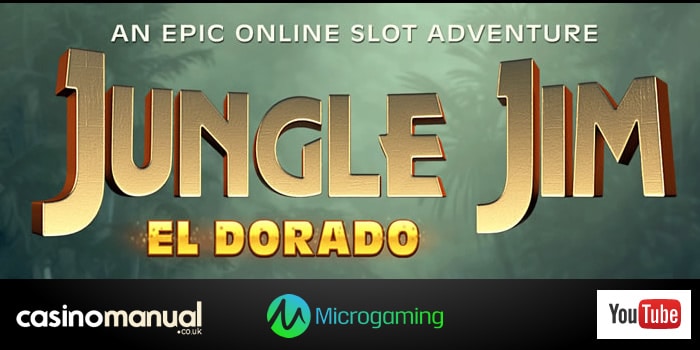 Microgaming has uploaded a video trailer on their YouTube channel of their upcoming Jungle Jim El Dorado video slot – watch it here at CasinoManual.co.uk.

Jungle Jim El Dorado will be released by Microgaming in early September (2016). The video slot will have 5 reels and 25 paylines and will be playable on all HTML5 compatible devices from just 25p a spin. The game will take you on a quest for lost treasure as you set off deep into the heart of the jungle in search of the legendary city of gold.

Jungle Jim will be armed with high tech gadgets and will have an Aztec feel as topazes, emeralds, rubies, snake sceptres, statues and treasure chests appear on the reels. It will use the Rolling Reels feature meaning winning symbols disappear to be replaced by new ones – giving you the chance to win again and again from every spin.

There will also be a Multiplier Trail added to the Rolling Reels meaning the multiplier goes up by 1 with winning spins – up to 5x!

As you’d expect, Jungle Jim El Dorado will come with a Free Spins feature where you begin with 10 free spins. The Multiplier Trail is enhanced with multipliers up to 15x available for consecutive winning free spins. You can also trigger 10 more free spins giving you 20 in total.

With a massive 3,680 times your bet available to be won on every free spin, Jungle Jim El Dorado promises to become an instant hit with players. To see the game in action, watch Microgaming’s official YouTube trailer below:

Microgaming has recently (this morning) announced they will be releasing the official Tarzan video slot later this year. This month, they released the angling-themed Reel Spinner which is a good game – I also recommend you play some of their most popular titles including the cult-favourite Immortal Romance and the branded Jurassic Park.

You can play Microgaming video slots at Casino Cruise who have a special and exclusive deal for CasinoManual.co.uk readers – you will receive 55 Starburst free spins when you sign up for starters. Then there’s a 200% first deposit bonus up to £100 (deposit £50, get £100 free) and 100 more free spins (on Starburst) once you deposit.