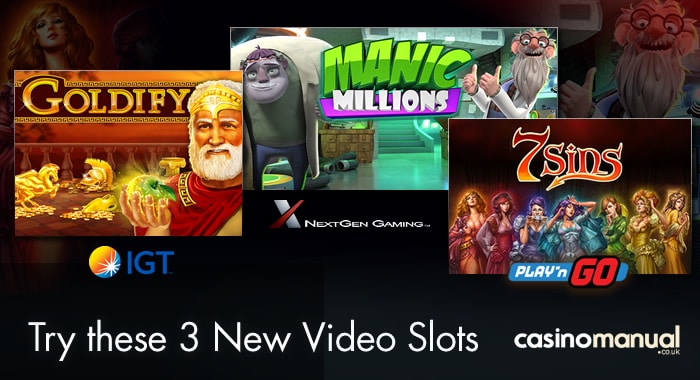 You can find reviews of 3 new video slots added here at CasinoManual.co.uk from IGT, NextGen Gaming and Play ‘N Go – find out more below.

Manic Millions was produced by Icecap Studios in conjunction with NextGen Gaming and has 5 reels and 25 paylines. With a mad scientist theme and medium to high variance, it’s playable on all devices from just 25p per spin. Look out for Igor giving you a wild symbol on 1 or more reels randomly in the base game.

In the Electrifying Free Games feature, Igor can randomly intervene to give you up to 3 wilds on 1 or more reels – there’s also up to 20 free spins on offer. If you miss out on triggering the free spins feature, the Igor Scatter Bonus feature sees Igor giving you that much-needed 3rd scatter.

7 Sins is a 5 reel, 243 ways to win game from Play ‘N Go. Based on the 7 deadly sins, it’s playable from just 10p per spin on all devices. You will see beautiful women who represent pride, greed, lust, envy, gluttony, wrath or sloth (the 7 deadly sins).

Look out for the double wild symbol appearing on reels 2 and 4 as this allows for possible 7 of a kind combinations. The Free Spins feature rewards you with 7 free spins with the multiplier at 1x – it increases by 1 after every free spin meaning the last free spin will be subject to a 7x multiplier. Each sin will appear as a stacked symbol on the middle reel too. Be warned though, 7 Sins is high variance.

Goldify is powered by IGT and has 5 reels and 40 paylines. The game is playable on all devices from 40p per spin and has a Greek mythology theme as it’s based on the legendary King Midas who turns whatever he touches into gold.

In the base game, choose to goldify whatever symbol you want – this symbol then gives you 5 times its original value when part of a winning combination. There is also a Free Spins Bonus feature where you can get up to 100 free spins with 5 goldified symbols! There are retriggers available with a massive 500 free spins to be won.