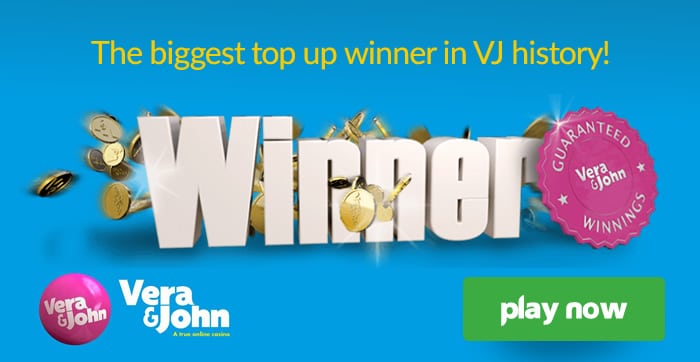 As a result, he was June’s biggest winner – Vera & John Casino then topped up his account with £51,000 to give him a life-changing £100,000. The player was playing in his first month and Vera & John was the first online casino he ever played at!

Vera & John have dished our millions in wins with their Guarantee Mania promotion and you could be next. CasinoManual.co.uk readers are welcomed with an exclusive 100% first deposit bonus up to £200 – the standard is 100% up to £100 so there’s an extra £100 free if you want it.

The latter is an ancient Egyptian themed offering which is playable on all devices. With 5 reels and 10 paylines, this game is all about the Free Spins feature where you will begin with 10 free spins. However, 1 symbol is randomly chosen to become the special symbol – when it appears, it will expand to take over the whole reel! Book of Dead is highly volatile so tread carefully.

They also offer all the favourites including NetEnt’s Dead or Alive, Microgaming’s Thunderstruck II, WMS Gaming’s Zeus 1000 and IGT’s Lucky Larry’s Lobstermania 2. Customers can benefit from 24 hour cashouts including weekends, round the clock customer support and a steady flow of promotions and offers.