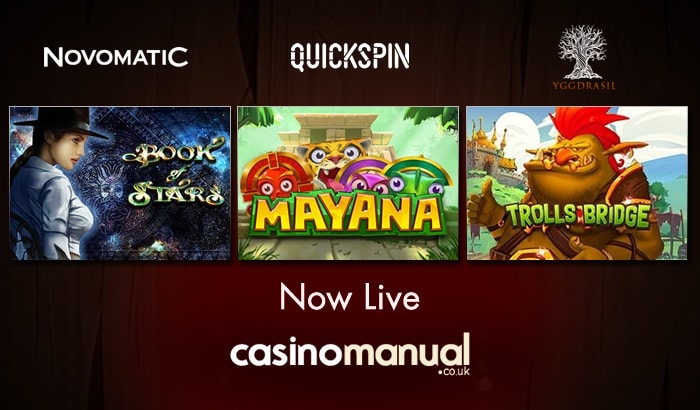 October is shaping up to be a busy month for new releases with Trolls Bridge, Mayana and Book of Stars among the new titles hitting the virtual shelves.

The most visually dazzling of the 3 new arrivals is Trolls Bridge. Created by Scandi developer Yggdrasil Gaming, this 5 reel, 20 payline game challenges players to cross the Trolls Bridge and trigger some cracking feature rounds.

Highlights include the free spins round where you can win up to 10 free spins with 5 modifier extras that award extra free spins, added wilds, wild reels, stacked or wild troll symbols and 2x multipliers. Land a Bonus Stone symbol on a winning spin and the payout is boosted by a 2x, 3x, 4x or 5x multiplier.

If it hits on a losing spin, you’ll be awarded an instant win award of up to 1,000 coins. Superbly designed as usual, this fantasy-themed game has the potential to be a cracker.

Also featuring high spec sound and visuals is the latest release from Quickspin, Mayana. A lost jungle civilisation is the theme in this unusual game that sees the game engine expand with each successive win until it offers 243 ways to win. Each expansion also brings with it a multiplier which doubles and then trebles payouts.

Land a winner on the fully expanded reel set to trigger the Much Mayana bonus which awards a bonus multiplier of between 4x and 20x to your final re-spin. With its cracking design and fast-paced play, Mayana should have action junkies purring.

If you’re a fan of volatile games then Book of Stars from Novomatic should be high up on your list of must play video slot. This 5 reel, 20 payline has an ancient feel and features much more impressive design than we’ve become accustomed to from Novomatic.

Expect the developer’s usual fast-paced gameplay though, especially in the bonus round that awards up to 20 free spins complete with special expanding symbols. If you fancy even more action, pay for the Extra Bet option and more wilds will be brought into play to further enhance your winning opportunities. Novomatic games usually offer simple gameplay and potentially explosive extras. If you’re a fan of games from this developer, Book of Stars ticks all the right boxes.