Join mythical Pegasus in the skies for untold riches in the new ancient Greek mythology themed Age of the Gods Ruler of the Sky from Playtech.

We’ve seen Zeus, Apollo, Athena, Poseidon, Hercules, Lachesis, Atropos and Clotho all feature in the Age of the Gods series and now it’s the turn of Pegasus, a mythical winged horse who is the child of Poseidon. With Mount Olympus in the backdrop, the game looks amazing and has a mysterious feel to it.

Age of the Gods Ruler of the Sky is a 5 reel, 40 payline offering that can be played on desktop, mobile and tablet devices like iOS and tablet from as little as 40p per spin. With Greek artefacts like harps, vases and Athenian helmets on the reels, it’s all about Pegasus.

Pegasus is the wild symbol and appears stacked on all 5 reels – the stacked wild comes into its own in the only bonus extra, the Mighty Pegasus Free Games feature, as it appears a lot more frequently. Beginning with 5 free spins, you can win unlimited additional free spins too.

Medium to high variance, there’s up to 1,000 times your bet up for grabs on every single spin – join Pegasus in the skies in the Age of the Gods Ruler of the Sky video slot review where you can also sample for free.

Age of the Gods Ruler of the Sky can be played at bgo Casino – if you love Playtech games, bgo Casino is the place to play as they release their video slots before any other online casino. They also are the only online casino right now to offer you Raiders of the Hidden Realm, Fiesta De La Memoria, My Fair Pearl, Gem Burst and Vampire Princess of Darkness. 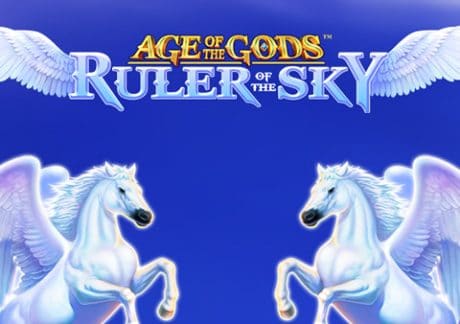 Age of the Gods Ruler of the Sky