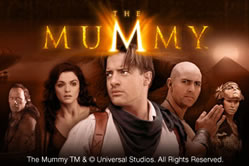 We are very excited to announce that you can find The Mummy slot review here at CasinoManual.co.uk. This new Playtech powered slot game is sure to be a big hit in 2012.

This video slot game is based on the huge blockbuster movie which starred Brendan Fraser. It comes with a nice 10,000 coin jackpot and more features that you can get your head around.

It has 3 bonus rounds with the Lost City Adventure Bonus round being packed full of features within it. It has 6 features to be precise which you will get to in subsequent order. These include the Expanding Mummy which is a Wild symbol that expands to occupy an entire reel and the Collapsing Reels which make winning symbols explode and filled with new symbols so you can win again and again.

There is also a Free Games bonus round where you will get 5 free spins and 1 Super spin. During the free spins, Wilds are counted and then distributed randomly throughout reels 2, 3 and 4 for your 1 super spin.

Finally, there is a Mummy Hunt Bonus round which will take on a hunt for mummies in the depths of the pyramid. Each mummy you kill will reward you with a cash prize. Try killing all 10 mummies for maximum payouts but don’t get caught.

The Mummy has too much going on to write about but it’s sure to keep you guessing. The Mummy gives you access to the bonus features pretty frequently too which is great.