Betfred Casino will soon be releasing the much anticipated Thor slot game – read about the game below and watch the official video preview.

Thor is set to become the next Marvel slot game to be introduced by Playtech – they have successfully launched some great Marvel slots such as The Incredible Hulk, Fantastic Four and Iron Man 2. If Thor is anything like any of these, it will become a huge hit with slot lovers.

With Thor, you can the join the Mighty Avenger himself and hunt down riches from another realm. It has 5 reels and 30 paylines and is based on the Thor blockbuster movie. You will taken on a journey to the distant land of Asgard and seek out fortunes by fighting your way through 9 worlds inhabited by Heimdall, Laufey, the Frost Giants and more. 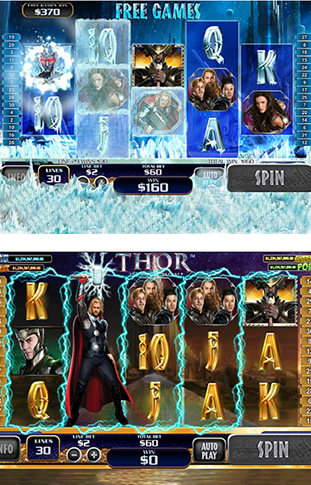 It has 2 on-reel respins features which contain random and locked stacked wilds – in the Lightning Respin feature you can be rewarded with up to 5 wilds whilst in the Thunderstorm Respin feature the 2nd reel is frozen and covered with wilds.

Then you have the Rainbow Bridge feature where you switch between 2 modes. In the Jutenheim Free Games feature, the frost giants freeze winning combinations for your next spin. In the Earth Free Games feature, The Destroyer blows fire onto random reel positions to multiply your wins.

Thor is going to be a huge hit this winter – the character inspired Microgaming to produce Thunderstruck and Thunderstruck II (which are hugely successful) so I bet Playtech can’t wait to release their version. You can watch the official Thor video demo below: http://www.youtube.com/watch?v=BZasUONh5So&feature=plcp

Thor will be available to play first at Betfred Casino – they have been releasing new Playtech slots before anyone else. This includes John Wayne, Sultan’s Gold, Plenty O’ Riches and The Sopranos. Register today and try out the other Marvel slots such as The Incredible Hulk and Fantastic Four – they are brilliant. Betfred Casino process withdrawals within 12 to 24 hours too and have been around for years.

Play Marvel Slots at Betfred Casino & get ready for Thor