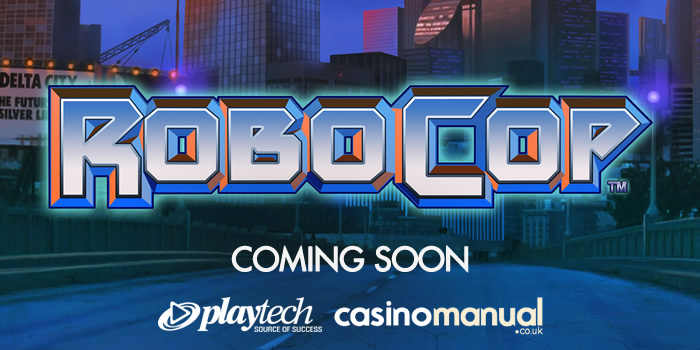 Playtech will be releasing a RoboCop video slot very soon – they have released a YouTube trailer showcasing the game which can be watched here at CasinoManual.co.uk.

Playtech has released plenty of branded titles in the past and RoboCop looks like their next one – the game will have 5 reels and 25 paylines and will be playable from just 25p a spin on all devices. Featuring clips from the classic 1987 film, you get to help Murphy bring justice back to Detroit with a total of 8 bonus features.

Set in Delta City, RoboCop will benefit from 4 randomly activated bonus features which can give you wilds dispersed from the gun, an ED-209 big wild symbol, 2 different multipliers on each winning payline and picks to give you cash bonuses.

Lastly, there’s a pick feature where you can win cash prizes and get wilds and 5x multipliers for huge wins. To see RoboCop in action prior to its imminent release, watch the official YouTube trailer below:

Until its release, you can play plenty of Playtech branded video slots – you have The Flintstones, Space Invaders, The Mummy, the Batman series, King Kong, Top Gun and Gladiator Jackpot. I recommend you try the DC Comics titles with Green Lantern, Superman The Movie, Man of Steel and Superman II.

You can play all of these games at NetBet Vegas – new UK players are welcomed with 10 no deposit free spins on a choice of games including the ones mentioned. There’s also a generous 100% first deposit bonus up to £500.