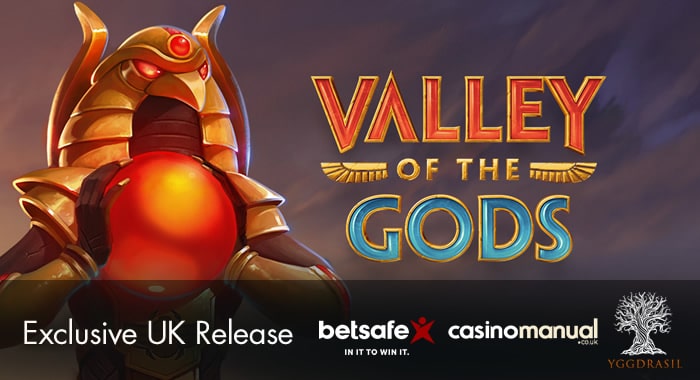 Finding something fresh among the ruins of Ancient Egypt is rare but Yggdrasil Gaming has managed just that in the form of Valley of the Gods which is now live exclusively at Betsafe Casino.

Good design is a given with video slots from Yggdrasil Gaming and the Scandi developer has excelled itself in this Arabian adventure. Set against a desert backdrop, the reels are flanked by a pair of Egyptian animal gods, Anubis and Horus. You’ll see a selection of hieroglyphs and animal god symbols spinning around the reels on each spin. Very impressive it all looks too, accompanied by haunting soundtrack which is an ideal match for the theme.

It’s not just the visuals that are a little different here as the same goes for the gameplay. When you first open up Valley of the Gods, you’ll notice that the 3 reel positions in each corner are blocked – land a winner and you’ll receive a re-spin and some of the blocked reel positions will magically open. The precise number depends on the winning spin. The number of ways to win increases too, starting at 45 but rising to 3,125 if you manage to open up all of the reels.

Land a winner on a fully cleared set of reels and the payout is doubled. It also opens up the Scarab Collection extras. Look out here for the red and blue overlay beetles – land 5 of the blue beetle to light up the Horus meter and the multiplier applied to your wins increases by 1. Light up the red Anubis meter with 5 red beetles and you’ll receive an extra life. This keeps the full reel set open even if you have a losing spin.

If you do land a winless spin and have no lives left, you’ll revert back to the base game with corner positions blocked up. We’ve made endless trips across the desert to the land of the pyramids so it’s great to see a video slot that offers something different to the usual free spins and pick me rounds. Throw in the superb design and Valley of the Gods is an unusual and entertaining take on a classic theme.

Take it for a spin exclusively at Betsafe Casino. New players can get bonuses on their first 3 deposits worth up to £1,000 as well as 25 Gonzo’s Quest free spins and 35 Gonzo’s Quest big spins worth £1 each.