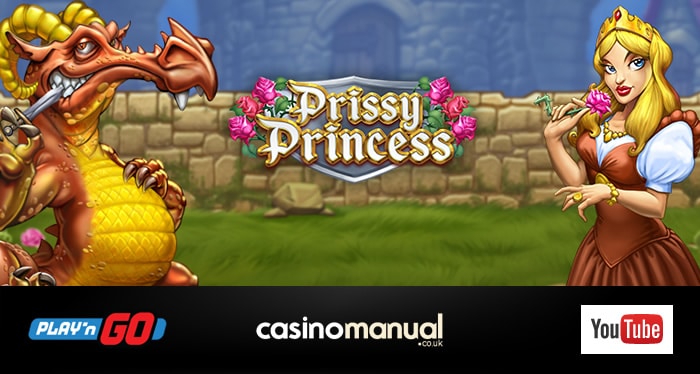 Play ‘N Go will be releasing Prissy Princess on the 23rd of February (2017) – in the meantime, watch the official YouTube trailer and find out what to expect here at CasinoManual.co.uk.

Prissy Princess will be a 5 reel, 20 payline video slot featuring high end design and animations with a medieval theme. It will be playable from just 20p a spin (across desktop, mobile and tablet devices as standard) as you take on a fire-breathing dragon.

It will have medieval weapons, suits of armour, swords and shields on the reels as well as 3 brave knights. It will benefit from a Crumbling Towers feature meaning all rows with a winning symbol on it will crumble to be replaced entirely by new symbols – you will then get a free re-spin where you can win again and again.

There’s also a randomly triggered Dragon’s Breath feature where the dragon breathes fire onto the reels turning 3 symbols wild. The Dragon’s Pride feature sees 3 knights on a reel turn into a wild reel. There will be a massive 6,003 times your bet to be won on each spin! To see Prissy Princess in action, watch the official YouTube trailer below:

In the meantime, you can play all Play ‘N Go video slots, including their latest title Jade Magician at Unibet Casino – they have games from NetEnt, IGT, WMS, Yggdrasil Gaming, Microgaming, Thunderkick, Quickspin, Yggdrasil Gaming and many more.