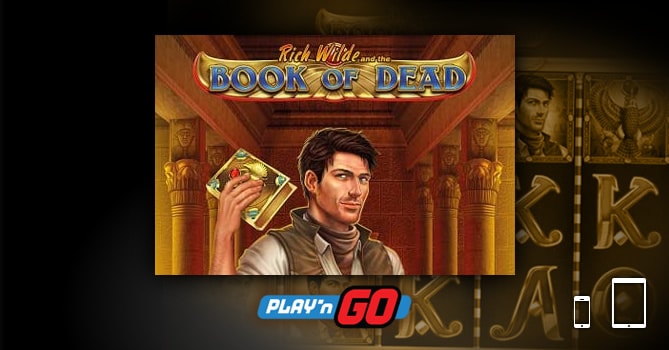 Play ‘N Go has released the Book of Dead slot – the game is only available to play on mobile and tablet devices. Find out about the Book of Ra Deluxe-inspired title.

Book of Dead was released the other day and is a 5 reel, 10 payline game from Play ‘N Go. It’s the third slot game featuring adventurer Riche Wild which takes inspiration from Novomatic’s Book of Ra Deluxe slot. In fact, Book of Dead is identical to Book of Ra Deluxe in terms of theme, gameplay and bonus features.

One thing I must say is that Book of Dead looks much sharper than its Novomatic counterpart as you’d expect. Play ‘N Go has released the game only to play on mobile and tablet devices oddly and can played from just 10p a spin.

Book of Dead is a very volatile offering which showcases the bird god Horus, Anubis the dog god and gold warrior death mask and Riche Wild. Look out for the archaeologist as this is the highest value symbol with a 5,000-coin win if you land 5 on a payline.

The scarab beetle is the key to triggering the Free Spins feature with 3 or more rewarding you with 10 free spins. As with Book of Ra Deluxe (and other Novomatic slots such as Lord of the Ocean), 1 symbol is chosen to be the special expanding symbol – when this randomly chosen symbol appears on the reels, it will expand to cover the whole reel. If you manage to get a few on a free spin, prepare yourself for huge wins.

We haven’t decided to review Book of Dead as you won’t be able to play the game for free on your desktop device – however, you can watch Play ‘N Go’s official YouTube trailer below which shows you the game in action:

If you like the sound of Book of Dead, I recommend you try other Play ‘N Go slot games such as Eye of the Kraken, Leprechaun Goes Egypt, Pimped and Riches of Ra. You can play all of these games at Casino Cruise who welcome CasinoManual.co.uk readers with an exclusive 55 no deposit free spins (on NetEnt’s Starburst). There’s then an exclusive 200% bonus up to £100 (deposit £50, get £100 free) as well as a further 100 free spins once you deposit.