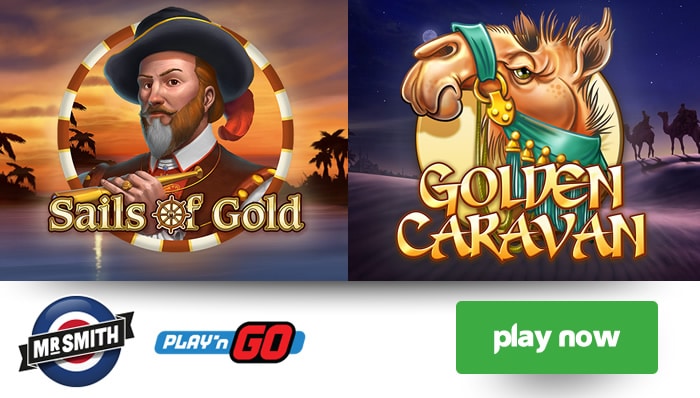 Play ‘N Go released both Sails of Gold and Golden Caravan a few months ago – however, they were only for mobile and tablet play. As of now, they can be played on desktop devices (i.e. laptop/PC) so have been reviewed and added to CasinoManual.co.uk.

Sails of Gold has 5 reels and 10 paylines and is based on the adventures of Christopher Columbus as he searches for riches but discovers the New World. Playable from 10p per spin, the Free Spins feature gives you 10 free spins initially with the ship scatter acting like an extra wild symbol.

If you get 3 ships during a free spin, you will get another 10 free spins – there’s no limit to how many you can win. With wins of up to 5,000 times your bet, read the Sails of Gold video slot review for full details.

Golden Caravan also has 5 reels and 10 paylines and can be played from 10p per spin. You are taken to Arabian on an adventure with Marco Polo to the desert. The Free Spins feature also gives you 10 free spins but all wins are initially doubled. As with Sails of Gold, the scatter (this time the camel) becomes an extra wild symbol.

However, if you get 3 camels during the feature, the multiplier increases by 1 and the free spins counter resets to 10. There’s no limit to how many times this can happen too! Tread carefully though – this game is highly volatile with wins of up to 5,000 times your bet available. Check out the Golden Caravan video slot review.

Where to play Sails of Gold & Golden Caravan?

I recommend Mr Smith Casino – they have video slots from Net Entertainment, WMS Gaming, IGT, Microgaming, NextGen Gaming, Barcrest, Bally and Yggdrasil Gaming. Some of the latest additions include Frozen Inferno from WMS and Theme Park: Tickets of Fortune from NetEnt.

As a CasinoManual.co.uk readers, you are welcomed with an exclusive offer – this consists of a 200% match bonus up to £200. This means you will get £200 free when depositing only £100. On top of this, you will get 50 Starburst free spins once you’ve deposited.